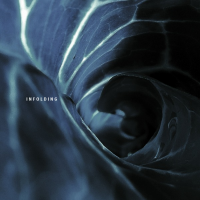 From the serene to the unsettling, this latest Spin Marvel project morphs into a myriad of moods and melodies over the course of six dynamic tracks. “Canonical” opens with an airy ambient touch before exploding into free jazz tumult paced by Harries’ throbbing fuzz bass and France’s powerful traversing of the kit, with Molvaer’s highly processed cathartic wail layered over the top. “Tuesday’s Blues” opens with spacious trumpet before gradually evolving into an in-the-moment adventure anchored by Harries’ hellacious fuzz bass and France’s interactive, Elvin Jones-inspired swing beat. “Two Hill Town” has Molvaer creating half-time trumpet melodies that float dreamily over France’s simmering pulse before the proceedings heat up to a turbulent boil. “Leap Second” makes dramatic use of silence and echo, with Molvaer’s haunting trumpet tones resounding over France’s subtle brushwork before the piece builds to an intense crescendo. The 16-minute “Same Hand Swiss Double Pug” opens as a kind of ambient bolero before France bursts into a Buddy Rich styled flurry on the snare drum midway thru, triggering a change in mood that culminates in a freewheeling collective improv. And the collection closes on a haunting and kinetic note with the echo-laden “Minus Two,” Emre’s lone drumming showcase.

France, a veteran drummer on the U.K. jazz scene who played in the cooperative group First House and the big band Loose Tubes during the ‘80s and later worked with Iain Bellamy and Django Bates in the ‘90s, has performed and recorded with some of the world's great musicians including Kenny Wheeler, John Taylor, Lee Konitz, Dave Holland, Arild Andersen, Ralph Towner and Marc Johnson. Currently a Professor of Jazz (Drums/Percussion) at the Royal Academy of Music in London, he applies his considerable skills and musical touch to the kit in the more open-ended environment of his Spin Marvel projects. “The use of openness and space is a very important part of what we do,” he says. “And creating something from this place allows the musician to feel free and uninhibited and move it in a direction they want to express. I have known Nils for many years and was always hoping that an opportunity would arise to somehow get him involved with Spin Marvel”. Nils commented, “To play with such wonderful gifted and open minded musicians was a true pleasure”.

Emre, a ubiquitous London session drummer and in-demand producer-programmer-engineer-remix artist, brings a visionary vibe to this latest project. “Infolding was my first time working with Spin Marvel,” he says. “I was a huge fan of the earlier records and was hugely excited to get involved. It's a very honest record despite the heavy processing. It's all live takes with no edits or overdubs.

Infolding began as a single day of live recording with France, Molvaer, Harries and Evensen before Emre came onboard. “It was recorded live in a four hour session for the BBC,” explains France. “Sometime after the recording I sat and listened to the takes and selected the performances to form a programme to fit the BBC R3 running time. We were all very happy with the session and how the music was sounding so I forwarded the master files to producer Emre Ramazanoglu, who then worked with the music and produced it for us.

“Martin asked if I would be interested in trying to take the sound on from where it had got to at the end of this session,” says Emre. “We didn't really plan this next stage at all but it was understood that we both wanted to keep the unedited live takes and bring out the intensity of the performance as much as possible. I spent a few hours with Martin and Tim on the first mix to check that they were into the approach I was taking and then I mixed the rest myself, trying to establish a coherent atmosphere for the record whilst letting the music and performances lead the way.”

Emre explains his modus operandi on Infolding: “I tend to mold my mixing style to the project at hand and on this one I just was led to that kind of dramatic, spacey sound by immersing myself in the mix and creating as much of a performance there as I could. I mixed these tracks really quite intensely and stuck with my first reaction and the decisions that I made from it. I intensively used convolution processing to get different instruments modulating each other and a lot of interactive compression and effect processing to shape the individual voices into larger, dense blocks of sound in which the boundaries between the instruments are blurred perhaps.

A dynamic and inventive collaboration between potent musical forces, Infolding breaks all the rules while leading the way for new possibilities in music-making.

TRACKS ABOUT THE LABEL

RareNoiseRecords was founded in late 2008 by two Italians, guitarist/arranger/ producer Eraldo Bernocchi and all-round music nut Giacomo Bruzzo. Located in London, the label was created to present a platform to musicians and listeners alike who think beyond musical boundaries of genre.

AVAILABLE IN STORES AND ONLINE ON MARCH 2, 2015 AND THROUGH RARE NOISE RECORDS ON CD, VINYL AND HI-RES DIGITAL DOWNLOAD.