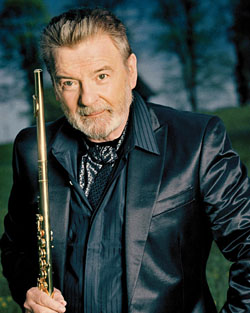 Typical of Galway's innovative approach to both his life and his career, O'Reilly Street has an unusual twist, as it features music from the Claude Bolling Jazz Suites with a dynamic Afro-Cuban beat. The recording includes Bolling's “Baroque and Blue," an exciting new arrangement of Bach's “Badinerie" as well as a number of vibrant new compositions by Tiempo Libre's musical director and pianist Jorge Gomez.

Commented Galway on this album: “I think this is one of the most outstanding recordings I've ever been involved in and I'm very excited about it...at my age to get to do this sort of thing is fantastic!".

Galway is a consummate entertainer whose charismatic appeal crosses all musical boundaries. His achievements have made him one of the most respected artists of our time. He has recorded more than 60 albums which have sold over 30 million albums worldwide. As he approaches his 70th birthday, this dynamic new recording celebrates a new stage in his 50 year career. Growing up, Tiempo Libre's members were all classically trained in Cuba's premiere conservatories. Now, as the first authentic all-Cuban timba band in the U.S.A, they are hailed as ambassadors for modern Cuban music and culture. “Tiempo Libre is known for its sizzling timba music, said All About Jazz,...which has even the most reserved of concert hall audiences out of their seats and dancing in the aisles."

To put the Cuban connection into context, Galway--an avid history buff--had been fascinated to learn about a fellow Irishman, General O'Reilly. O'Reilly was a key military strategist in Cuba and has a street in Havana named after him, hence the title of the new album. Furthermore, many of the cities where Tiempo Libre's members were born count the Irish among the original settlers in the 18th century.

Galway was awarded an OBE (Order of the British Empire) in 1979 and was knighted in 2001 by Her Majesty Queen Elizabeth II for services to music.