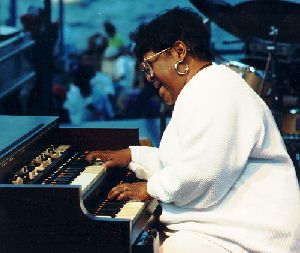 Shirley Scott was a leading figure in one of the most popular of all jazz movements, the off-shoot of hard bop known as soul jazz. The style was led by Hammond organ players like Jimmy Smith and Jack McDuff, and although her initial ambition was to succeed on piano, Scott established her reputation on the Hammond B3 alongside these titans.

She developed her own distinctive approach to the instrument. Despite her slight build, she was a powerful player, but one who liked to emphasise subtlety and control over the outright excitement favoured by many exponents of the style. That was evident in both her inventive soloing and in her probing, suggestive accompaniments behind the many saxophonists she worked with over her career.

She was born into a family with strong roots in jazz. Her father ran a jazz club in Philadelphia, and her brother played saxophone. She learned piano at school, and took up trumpet as a second instrument for a time. She took both bachelor and masters degrees at Cheyney University, one of the longest established African-American institutions in the USA, and later taught there.

Her career as a musician took off when she bowed to pressure from promoters and switched from piano to the newly popular Hammond B3. She worked with a local band in 1955 which included John Coltrane, then on the cusp of emerging as the most important jazz creator of his generation.

When saxophonist Eddie "Lockjaw" Davis found himself short of an organ player in the city, he overcame his initial doubts about having a woman in his band and hired Scott. He was quickly won over, and she enjoyed a successful stint with the hard-hitting saxophonist, including recording the classic sessions released as The Eddie Davis Cookbook, but left the band in 1960.

She married another saxophonist, Stanley Turrentine, shortly afterwards, and they worked together a great deal over the decade of their marriage, occasionally hiding behind barely disguised pseudonyms like "Little Miss Cott" on each other's records, for contractual reasons.

She made her recording debut as a leader with Great Scott! for Prestige in 1958, and recorded regularly for a variety of labels in the next two decades, including Prestige, Impulse and Atlantic. She worked with saxophonists Oliver Nelson (in a big band setting), Harold Vick, Jimmy Forrest, and Dexter Gordon, and trombonist Al Grey, among others.

The Hammond fell out of fashion for a time in the 1970s, and she returned to her original choice of instrument, the piano. The big revival of interest in the Hammond from the late-1980s restored interest in her music, but she rarely performed on the organ again, preferring to stay with piano. Her final recording, Walkin' Thing, was released in 1996.

She took up a post teaching jazz history and piano at Cheyney University in 1991, and served as musical director for Bill Cosby's short-lived television quiz show You Bet Your Life, which was recorded in her home city of Philadelphia.

Her health began to fail after using the now banned diet drug combination "fen-phen", which she began taking in 1995. By 1997 she had developed primary pulmonary hypertension as a result of the drugs, and was permanently bed-ridden. She sued the manufacturer and the prescribing doctor, and was awarded a settlement of 8 million dollars in 2000.

She is survived by two sons, three daughters, nine grandchildren and two great-grandchildren.

Kenny Mathieson is a freelance writer based in Scotland. His book Giant Steps: Bebop and The Creators of Modern Jazz (1999) is published by Payback Press. E-mail: [email protected]