Winners will be announced at Symphony Space Performing Arts Center in New York on June 21st-22nd. 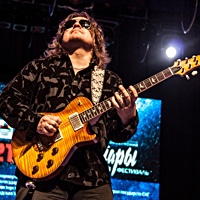 Larry Coryell Official Facebook Tributary commented: “Congratulations Roman! And many many thanks for dedicating this to Larry and it’s so special that he actually heard this tune before you recorded it!"

Being the 2009-2019 Independent Music Awards 4-times winner, USA Songwriting Competition First Prize winner and Russia’s most prominent and celebrated guitarist Roman Miroshnichenko is featured in The Great Jazz Guitarists Encyclopedia by Hal Leonard Books, the most comprehensive and competent guide to jazz guitarists ever published (from Django Reinhardt to John McLaughlin and beyond). During his career Miroshnichenko has performed/recorded with such musicians as Steve Vai, Jennifer Batten, Marco Mendoza, Heather Headley, Djivan Gasparyan, Dominique di Piazza, to name a few. For a few years, he played in a duo with Larry Coryell.