“Wonder and innocence, gaudiness and cheer: can it be any surprise that the jazz drummer Matt Wilson thrives around the holidays?” – Nate Chinen, The New York Times 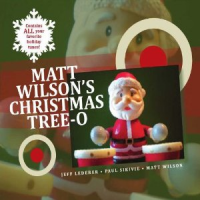 4-stars. “Matt Wilson's Christmas Tree-O provides Yuletide greetings so eloquent and mind-bending even the nastiest of Scrooges will want to pay attention." —DownBeat

Behind the humor is a deep grounding in jazz and serious chops. JazzTimes notes that there is “almost nobody in Wilson’s peer group with a broader sense of jazz history, or a more natural sense of time, or a stronger signature as a bandleader, or more goodwill among his fellow players.” A gifted composer, bandleader, producer and educator, Wilson is renowned for his virtuosic flair as a drummer and his good- vibes positivity as a bandleader, not to mention his facility for collaborating with top musicians across the spectrum of jazz – from the mainstream to the avant-garde and virtually everything in between.

Matt Wilson’s Christmas Tree-O brings its 16 Days of Christmas North American Tour to cities and towns from coast to coast from November 30-December 23.

New York based drummer and Grammy nominee Matt Wilson is one of today’s most celebrated jazz artists. He is universally recognized for his musical and melodic drummer style as well as being a gifted composer, bandleader, producer and educator. Matt’s positive energy, sense of humor and ability to explore a broad range of musical settings keep him in constant demand. In addition, Wilson’s dedication to jazz has helped establish him as a beloved world ambassador for the music, on and off the bandstand. Wilson has played on hundreds of recording sessions and on top stages the world over, from the White House to historic jazz clubs, from Lincoln Center to festivals and concerts around the globe.

Wilson has appeared on over 350 recordings as a sideman and has released 12 albums as a leader as well as 5 as a co-leader. Gathering Call, his most recent release as a leader, earned wide praise for creating music that the Wall Street Journal called “bright, bouncy, unabashedly infectious, with no loss of virtuosic solos and edgy musicianship… direct, contemporary and compelling.” Wilson will be releasing a new recording in the spring of 2016 to celebrate his 20th anniversary with Palmetto Records. The recording, titled Beginning of a Memory, is dedicated to memory of Wilson’s wife Felicia, who passed away in 2014.