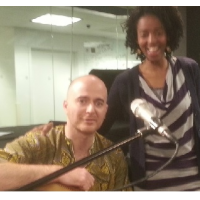 slideshow
If the American Blues tradition has been overly saturated by endless retellings of the same songs by the same artists, it is not so much a declaration of a lull in creativity and innovation as much as it is a sign of how powerful the roots are. It is the well spring from which all current popular styles of music hold allegiance to in one degree or another. Brandon Terzic along with Pyeng Threadgill has taken this to heart and have decided to dig even further into the rich soil of this tradition, reaching back across the Atlantic and using the Musical Traditions of Saharan and Sub Saharan Africa as a springboard to launch into new variations on timeless themes.

Brandon Terzic has spent his life searching for blues. Starting on the guitar he traveled in West Africa and the Middle East and came back a convert of the Arabic Oud and the Malian Ngoni, and no matter what situation he finds himself, from the traditional forms to the avant-garde, the blues never leaves his bloodstream.

Pyeng Threadgill is an artist of incredibly diverse tastes. Daughter of the great Jazz Composer Henry Threadgill, Pyeng was born with a silver spoon of creativity and her work has reflected this. Her debut album was a style bending reworking of Robert Johnson tunes, and her following output ranges from avant-garde leaning compositions to soft echoes of R&B and soul stylings.

The Blues Sessions residency at Barbes will be a chance for these artists to explore blues classics with a paradoxically new vision using old lenses. They will hold court every Saturday 6pm during the month of January.