Bob Karty's original compositions really felt like home to me. I remember saying that I wanted to play every note of this music... The melodies are beautiful, it has sophisticated harmony, and a language that I really hear and speak and look forward to participating in. --Paul McCandless, Grammy-winning multi-reed master and founding member of Oregon 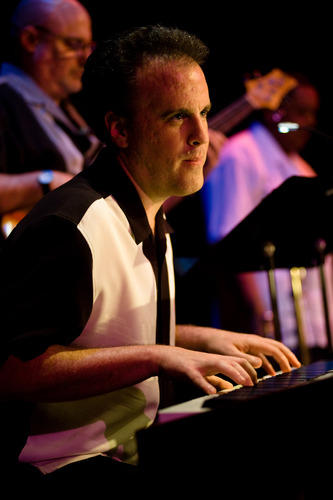 slideshow
Pianist and composer Bob Karty has launched a Kickstarter for his debut album as leader and composer, featuring all original compositions and a stellar band: Paul McCandless on saxophones, oboe, and bass clarinet, Mark Walker on drums and percussion and Steve Rodby on acoustic bass.

McCandless and Walker are members of the seminal jazz band Oregon; Rodby played for three decades with guitarist Pat Metheny and is one of the most in-demand producers in jazz.

He sent demos to McCandless unsolicited.

“I was immediately impressed and I had quite an emotional reaction to his music,” says McCandless in the Kickstarter project video. “It really felt like home to me. I remember saying in an email that I wanted to play every note of this music... The melodies are beautiful, it has sophisticated harmony, and a language that I really hear and speak and look forward to participating in.”

Karty’s project has a 30-day fundraising window, ending on October 9, 2015 at 8 pm Pacific Time. Kickstarter is all or nothing: if the $16,000 goal is not met, the project will not be funded.

McCandless, Walker and Rodby have collaborated on numerous projects, including McCandless' album Premonition on Windham Hill Jazz. Rodby has produced three releases for Oregon, including the quadruple-Grammy-nominated Oregon In Moscow.

“Steve told me that when the three of them get together, musical magic happens—but they don’t get the chance nearly often enough,” says Karty. “I’m thrilled to have them on board, and I can’t imagine a better team to bring my music to life in the best possible way.”

Crowdfunding sites like Kickstarter allow fans to support artists directly and bring fundraising within reach of independent artists like never before. In addition to essential services like processing donations (if the project is funded), Kickstarter provides a clearinghouse for information about the project from start to finish.