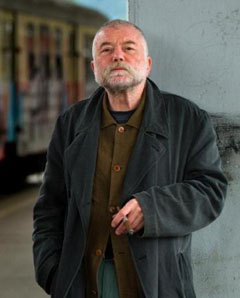 slideshow
German reedist Peter Brotzmann got his start in the '60s, quickly making a name for himself in the European free jazz and avant-garde music scene. Thanks to classic albums like 'Machine Gun,' Brotzmann is best known for conjuring a tone on his tenor sax that is not unlike an ill-tempered V8 engine with straight pipes.

But that isn't the whole story. Yes, the hard-blowing Albert Ayler is an influence on Brotzmann, but some of my favorite moments have come from the sensitive playing that balances the intensity—his live 'Wels Concert' with Mahmoud Gania on guembri and voice and drummer/percussionist Hamid Drake was a particular eye opener.

The 2011 edition of the Vision Festival in New York City honored Brotzmann on Wednesday, June 8, with a lifetime achievement award and featured the debut of three new Brotzmann groups.

The night opened with a quartet that featured Brotzmann, saxophonist/trumpeter Joe McPhee as well as bassists William Parker and Eric Revis. This interesting double-duo grouping looked like a head-scratcher on paper, but actually worked out quite well. Parker and Revis never really bumped into each other because of their contrasting styles—Parker playing a lot with his bow and accented his pizzicato playing with the usual array of plucks and pops while Revis focused more interactive groove lines. Like Parker, McPhee has been playing with Brotzmann on and off for years. His more blues-based style and dark, smoky saxophone tone seemed to only accentuate the unbridled energy of Brotzmann.

The results, however, were far from a high-energy blowout. There was a delicate trumpet-and-flute passage midway through the set that was as melodic as any piece from the jazz canon. But since the music was all improvised, it never stayed one place long, bouncing from vamping blues to modern classical to a long elegant section that had a distinctly North African vibe. The sold-out crowd (people were literally sitting in the aisles) gave energy back to the band making it a perfect meeting of a great set of improvised music for a crowd that was right there with the musicians.

Brotzmann was joined in the second set by young vibraphonist Jason Adasiewicz, who has made a name for himself in Chicago and has three fine albums including 2010's 'Sun Rooms.' He opened the set with a gambit where he banged the hard spines (called sticks) of two bows down upon the instrument's bar, which looked cooler than it sounded but was nonetheless impressive particularly because Adasiewicz left one smashed bow hanging off the instrument by its hair for much of the set. From there Adasiewicz went on to provide a series of textured backdrops conjuring up sustained flurries of notes by playing traditional mallets and also using a bow to draw out long tones by dragging a bow up and down across the edge of the bars.

Brotzmann seemed to work a bit harder this set than the last, having to carry the melody and rhythm. He responded by playing a set that was more blues-based, but also the setting allowed him to explore different horn techniques and ideas with a bit more depth than if a band was throwing ideas at him in bunches.

After festival founder Patricia Parker introduced Brotzmann to a standing ovation at the beginning of the final set, the reedist quickly and modestly told the crowd to stop making such a big deal and thanked them for coming and all the musicians for playing. This set's quintet featured reedists Mars Williams and Ken Vandermark, bassist Kent Kessler and drummer Paal Nilssen-Love. Surprisingly, this is the first time this quintet has played together as such, but all of them also have played in Brotzmann's Chicago Tentet.

The set opened with a ferocious bang, ignited by the three horn players squealing with that signature Brotzmann energy. The rhythm section was no less assertive with Nilssen-Love pounding the skins with the kind of commitment that has already led to a reputation as one of the very best young drummers on either side of the Atlantic. Although he was in his usual sleeveless button-down shirt, Kent Kessler was a ball of sweat five minutes into the set but nonetheless kept the band moving forward with unrelenting grooves.

After the initial opening volley, which sounded like a lost track from 'Machine Gun,' the band moved through a series of improvised pieces. The high-energy stuff sounded great, but there were some really nice points where the band brought it down—one passage had the three horns doing a nice classical chamber-like piece that had a strong folk-like melody played on flute by Brotzmann, another was a slow noir-ish blues featuring Brotzmann and Williams. The three horn players worked quite well together, switching off to different horns (more than a dozen between them) to find a series of interesting tonal palettes.

The set ended some 90 minutes after it started and four and a half hours after the program began. Brotzmann looked a little worse for wear, but so would anyone after playing as much music as he had. With a slight smile and a wave and he was done—no encore because none was needed.