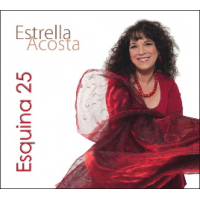 slideshow
Cuban vocalist Estrella Acosta just released her third album on the eStar label, named Esquina 25. Joined by internationally acclaimed musicians like Leonardo Amuedo, Carlos Irarragorri and Gerardo Rosales she creates an energetic, yet intimate and personal style, rooted in the sounds of her native Cuba.

“I enjoyed every note of the cd... very fresh arrangements and your voice ﬁts them perfectly. I loved the work of the tresero, as well as the bassist, the guitarist, the tenor player and the rhythm section, very tasty." —Paquito D'Rivera

“One of the best recordings of Cuban music realized in Europe... Estrella Acosta is one of the most versatile caribbean singers of our times." —Luis Tamargo

Esquina 25 brings together top international musicians from Cuba, Venezuela, Germany, the USA and the Netherlands. They create an original view of Cuban music in a wide spectrum of styles - son, bolero, rumba, guajira, trova, Afro-Cuban jazz and Lucumí chants, performed with plenty of room for creativity and improvisation, and with respect for the tradition.

The music pays tribute to the cultural variety that characterizes a Havana street corner where many Cuban writers, musicians and other culture bearers have met and inspired each other over the years - likewise, the band is a meeting point between musicians from different cultures, between Latin and jazz, between tradition and inventivity.This spring, Estrellaʼs band Esquina 25 presented its eponymous album in Europe with a concert at the prestigious BIMhuis in Amsterdam, the Netherlands. A video of the release party is available on YouTube. Now this recording has been released worldwide - it is available for download from CDBaby, Amazon.com, iTunes, ElWatusi.com and other sources in both MP3 and audiophile FLAC formats.

Future plans include an European tour and a return visit to North America. In the meantime, her music is being featured by radio stations all over the world, including WDNA in Miami, WKUT in Austin, Texas, WBGO in New York and Radio Gladys Palmera (Spain) on the internet. The Dutch music magazine Jazzism awarded the recording with four stars.

“...A nostalgic feast by an artist who for over twenty years celebrates her Cuban heritage around the world." &#151Carlos Olivares Baró, La Razón, Mexico