The music that she (Jessica) makes here, with that team and fellow tenor/husband Tony Jones, is predictably unpredictable, grounded yet far-reaching, and irresistibly intriguing in its unfolding. -- Dan Bilawsky, All About Jazz 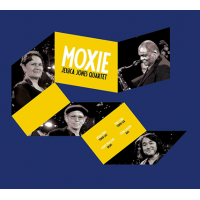 Moxie is the new release (December 8, 2015) from the Jessica Jones Quartet, reuniting band members from one of the band's original incarnations from over 30 years ago. Jessica recruited bassist Stomu Takeishi and drummer Kenny Wollesen in the early 1980's when they were both still studying at the New School. Since then they have gone on to stellar careers in the creative jazz world, performing with many eclectic and exciting musicians.

The Jessica Jones Quartet has played in the Knitting Factory Jazz Festivals, and the Eddie Moore Jazz Festival in Oakland, California, where the group headlined with special guest Don Cherry. The group has been featured in venues on the east and west coasts of the US and has released three previous CDs to critical acclaim. The band reunited for one special night at Dizzy's Club Coca Cola at Jazz at Lincoln Center (January 9, 2014) and immediately hit the studio to document the results.

The album includes originals by saxophonists Jessica and Tony Jones that sweep across the spectrum from hard-driving swing to heart wrenching ballads and incorporates a modern take on a Haitian dance groove as well as a floating, serene journey through Duke Ellington's “In a Sentimental Mood."

As Jessica relates, “It was a joy to go into the studio with Kenny and Stomu; so much creativity came forth on songs I thought I already knew. Stomu and Kenny are fearless and incredibly skilled in the art of making music sound new and go places it hasn't gone before. Kenny responds and supports every sound, tiny to large, and Stomu is like a wild card pulling you down a road you didn't see before. I love what they brought to the sound of the band. The feeling was familiar yet the music was new." Jessica and Tony Jones have shared the stage with Don Cherry and Cecil Taylor among many other widely celebrated artists. The foundation of this quartet is based in the history of the music, influenced by the leaders of modern jazz. The Jessica Jones Quartet is once again nodding at the past, reflecting the present, and calling to the future.