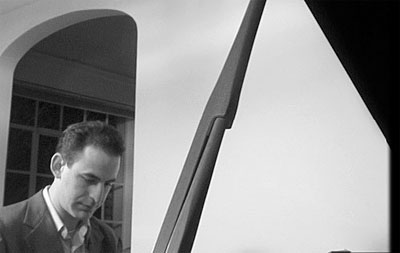 "Weiss proves himself as a confident composer and arranger in the progressive jazz mainstream."
- Nate Chinen, New York Times

“Don't be fooled. He's only playing a few notes, but boy are they the right ones."
- Neil Tesser, Listen Here!

Join jazz pianist/composer Ezra Weiss as he celebrates the release of his new CD Get Happy on tour October 12 - 30.

Weiss' piano playing evinces a distinctive expressiveness that is doubly impressive coming from a jazz musician who's still two years shy of age 30. This New Yorker also possesses composing and arranging skills of an unusually high order. He has earned the coveted ASCAP Young Jazz Composer Award no less than three times and has received rave review in the press. Weiss's new album, Get Happy (Roark Records) further evidences his wide-ranging abilities on a program of original songs and specially picked material from the Great American Songbook that, taken as a conceptual whole, concerns the pursuit of happiness. The album is available at ezraweiss.com and cdbaby.com.

Ezra Weiss is respectful of the modern jazz tradition defined by, among others, Thelonious Monk, McCoy Tyner and Art Blakey without being confined by it. Born and raised in Phoenix, Arizona, he furthered his early interest in jazz completing an undergraduate degree in music at the Oberlin Conservatory. Moving to New York City after a few productive years on the jazz scene in Portland, Oregon, Weiss fell in with some of the most respected jazz players in the Apple (for starters, Michael Phillip Mossman, Antonio Hart, Billy Hart). He also found sustenance for his creativity with musicians close to his age that he knew from Oberlin and with new friends he met studying at Queens College, where he completed a graduate degree in Jazz Studies.

Weiss' debut recording, The Five A.M. Strut, released in 2003, earned rave reviews as “not only a great first outing but also one of the more enjoyable recordings of the year" (Duck Baker, JazzTimes) and appeared on both the JazzWeek and CMJ radio charts. His second album, Persephone, which followed in 2005, also generated considerable praise. Weiss fronts the Ezra Weiss Quartet, has toured nationally and has led well-received bands in Oregon and, just recently, in Arizona, where he instructed classes at Scottsdale Community College.