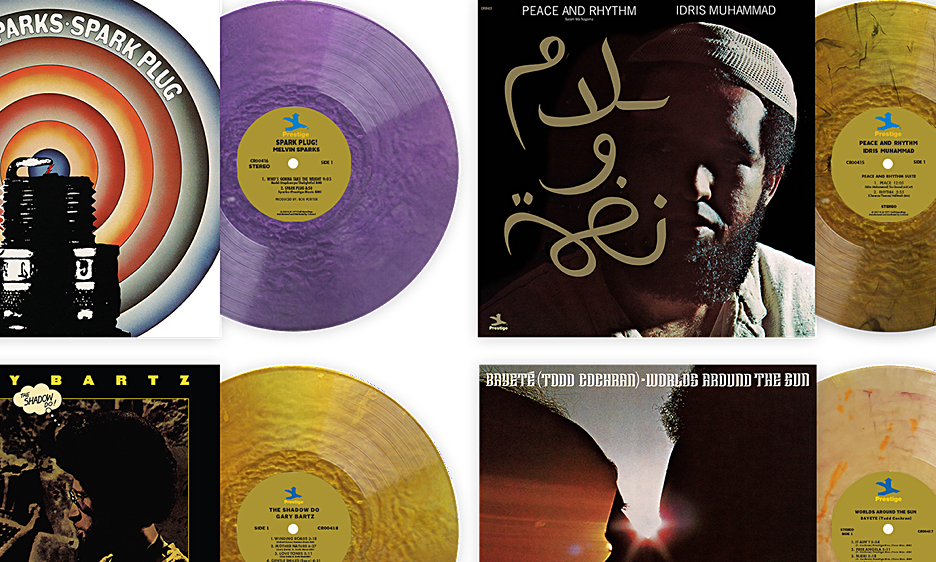 By
November 22, 2022
Sign in to view read count
Jazz Dispensary is thrilled to partner with Vinyl Me, Please for a second installment of album reissues, following our inaugural collaboration, in 2020. This latest bundle continues our sonic journey with four cosmically funky catalog gems from the early to mid-’70s. The reissues include Bayeté’s boundary-pushing debut, Worlds Around the Sun; Gary Bartz’s uplifting The Shadow Do; Idris Muhammad’s sumptuous Peace and Rhythm; and Melvin Sparks’ cinematic sophomore album, Spark Plug.

Offering an elevated listening experience, these carefully selected albums have all been meticulously remastered from their original analog tapes by Kevin Gray at Cohearent Audio and pressed on the highest-quality 180-gram vinyl at RTI. Featuring their original cover designs, the LPs are housed in heavy-stock tip-on jackets with OBI strips, and pressed on colorful, thematic wax (see individual colorways below). Limited to 1,000 copies per title, each album has been individually foil-stamped and numbered. The albums will also be made available digitally for the first time ever on July 29th, as well as on Hi-Res streaming and download available exclusively through Qobuz for the first three months after their release.

Bayeté ­– Worlds Around the Sun

Worlds Around the Sun, the 1972 debut from Bayeté (an alias of the keyboardist, composer, producer, and conceptual artist, Todd Cochran), serves as a powerful introduction to Cochran’s radical expressionism and multi-faceted talents. The album was written, produced, and arranged by the 21-year-old prodigy, who rose to fame as a sideman for vibraphonist Bobby Hutcherson (who joins Cochran on the record, alongside a broad array of celebrated musicians, including Fred Berry, Oscar Brashear, and Wayne Wallace). Through six stylistically dynamic—yet cohesive—tracks, the artist invites listeners on a journey that spans space and time, with selections like the Eastern-influenced “Njeri (Belonging to a Warrior),” the epic “Bayeté,” and “Free Angela (Thoughts… And All I’ve Got to Say),” written for the imprisoned activist, philosopher, and author, Angela Davis. The ambitious composition, which became one of Cochran’s best-known works, was later covered by Santana. Sampled by a range of artists, including Kendrick Lamar and De La Soul, Worlds Around the Sun is reissued on vinyl for the first time. This special edition is pressed on “Sun Swirl” vinyl.

Gary Bartz – The Shadow Do!

Reissued on vinyl for the first time since its release in 1975, this classic gem from saxophonist and vocalist Gary Bartz delivers a euphoric and supremely funky sonic voyage. Produced by the pioneering sibling duo of Larry and Alphonso “Fonce” Mizell—whose frequently-sampled work shaped the sound of ’70s jazz and R&B—The Shadow Do! finds Bartz at his finest, as he delivers a joyful collection of songs, including the expansive opening track, “Winding Roads,” the electrifying “Mother Nature,” the blissful “Love Tones,” and the supremely smooth “Gentle Smiles (Saxy),” which ’90s hip-hop fans may recognize from A Tribe Called Quest’s “Butter.” In addition to many outstanding sax performances by Bartz (plus synths and multi-layered backing vocals by the Mizel brothers), the album features an all-star cast of musicians, including keyboardist Hubert Eaves, drummer Howard King, Reggie Lucas (guitar), Mtume (percussion), and former Miles Davis sidemen Michael Henderson (bass). This limited-edition edition of The Shadow Do! is pressed on “Love Tones Gold.”

Reissued on vinyl for the first time since its release in 1971, Iris Muhammad’s Peace and Rhythm blends Eastern influences with opulent funk, resulting in a listening experience that is equal parts smooth, heady, and uplifting. Released months after the drummer’s debut, Black Rhythm Revolution!, the album’s centerpiece is “The Peace and Rhythm Suite”—a two-part, side-long ambient composition that was far ahead of its time. On the flip side, Muhammad partners with his wife, soul singer Sakinah Muhammad (who rose to fame with The Crystals under the name La La Brooks), for the pop-forward “Brother You Know You’re Doing Wrong” and “I’m a Believer,” while the drummer also leads a cover of Wilson Pickett’s “Don’t Knock My Love.” Joining the Muhammads is an uber-talented line up of sidemen, including bassist Ron Carter, keyboardist Kenny Barron, guitarist Melvin Sparks, and electric bassist Kenny Barron, among others. This limited-edition edition of Peace and Rhythm is pressed on “Believer Black and Gold Swirl.”

Reissued on vinyl for the first time in three decades, Melvin Spark’s sophomore album, 1971’s Spark Plug, finds guitarist Melvin Sparks at his finest, as he delivers laid-back, late-night grooves. The guitarist, who began his career as a member of The Upsetters (the storied road band which once counted Jimi Hendrix and Little Richard among its members), initially rose through ranks in the NYC soul-jazz scene as one of the most in-demand session players. The guitarist proved his prowess as a leader with his 1970 debut, Sparks!, on which he was joined by some of the biggest names in the genre. Spark Plug continues the thread, with the likes of Grover Washington, Jr. on tenor sax, Idris Muhammad on drums, Leon Spencer on organ, and engineer Rudy Van Gelder at the console. The album also finds Sparks expanding his writing, and dedicating a good portion of the album to his own material, including such standout tracks as “Dig Dis,” the cinematic “Conjunction Mars,” and the title track, which builds into a nearly nine-minute energetic jam, showcasing Sparks’ virtuosic talents on the guitar. Sparks also delivers renditions of two very disparate selections: Kool & The Gang’s “Who’s Gonna Take the Weight” and the Schwartz/Dietz-penned jazz standard, “Alone Together.” This limited-edition edition of Spark Plug is pressed on “Purple Plug” vinyl.