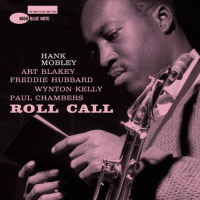 Starting with Soul Station, tenor saxophonist Hank Mobley embarked on a powerful series of recordings for Blue Note in the 1960s. His sixteen releases recorded during the decade tapped into virtually every musical trend, including bossa nova, boogaloo, funk and soul. All featured Mobley at his peak, exhibiting a bossy muscularity with a smooth, slippery articulation on solos. What's more, he was paired with a wide range of top artists, giving each album a different feel.

One of the finest (and I hesitate even to use that word, since all of his albums during the '60s had admirable qualities) was Roll Call. Recorded in November 1960, the album featured Mobley (ts), Freddie Hubbard (tp), Wynton Kelly (p), Paul Chambers (bs) and Art Blakey (d). Everyone on this album is at their peak. Blakey's drumming will raise hairs on your arm. Kelly's piano is frighteningly fluid. Chambers is rock solid. Hubbard is searing. And listening to Mobley is like watching a heavyweight boxer hit a heavy bag.

Mobley also was a terrific hard-bop composer. On Roll Call, Mobley was responsible for the title track, My Groove Your Move, Take Your Pick, A Baptist Beat and The Breakdown. The balance was a standard, The More I See You.

On Roll Call, Mobley's originals are sterling. The title track is a minor-key tour de force, with Blakey driving the show with cymbal crashes, press rolls and intricate drum patterns. My Groove, Your Move is a sassy walker with standout solos, particularly by Mobley. Take Your Pick features a terrific hard bop line that sounds as if it belonged on Freddie Redd's The Connection album. And dig Kelly's piano solo! Smooth as glass. A Baptist Beat is a funky blues. And the album closer, The Breakdown, is a barn burner with Blakey dropping random drum bombs and cymbal crashes. At one point, Blakey sounds as if he has has kicked his entire kit down a flight of stairs. Incredible.

To be sure, Mobley's 1950s releases are solid and engaging. But they're not quite as dynamic and eclectic as his 1960s work. There's a maturity in his '60s recordings that put him firmly in charge. Best of all are his originals, demonstrating once again that Mobley was vastly underrated quintet composer.