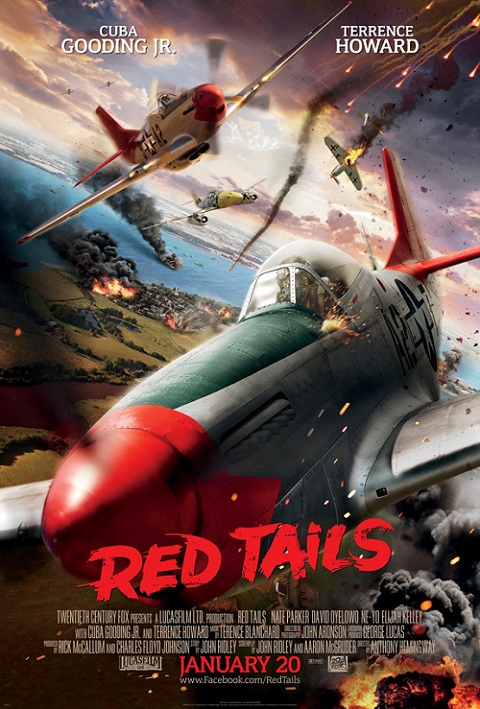 Los Angeles, CA: World-renowned film composer and musician Terence Blanchard has completed the score for the soundtrack for Lucasfilm's RED TAILS. A high-flying action epic inspired by the heroic exploits of the first all African-American aerial combat unit, The Lucasfilm Ltd. production of RED TAILS will launch on January 20, 2012, released by Twentieth Century Fox. Produced by Rick McCallum and Charles Floyd Johnson, the gripping WWII actioner is directed by Anthony Hemingway ("Treme," “The Wire," “Battlestar Galactica").

Produced by Lucasfilm Ltd., RED TAILS began development by George Lucas over 20 years ago. Several writers contributed to the script, but ultimately John Ridley completed the screenplay. Producers interviewed surviving original Tuskegee pilots and even gained access to official logbooks from their missions in World War II. The film was shot in Croatia, Czech Republic, Italy and England, and the film score was recorded in Prague as well with an 85 piece orchestra.

Terence Blanchard's work on RED TAILS comes fresh off the heels of his critically acclaimed score for the Broadway play, The Mother****** With The Hat starring Chris Rock. He is currently at work on the music for the Broadway remake of A Streetcar Named Desire and has been commissioned by the Opera St. Louis for a project that will premiere in 2013.

As a film composer, Blanchard has more than 50 scores to his credit and received a Golden Globe nomination for Spike Lee's 25th Hour. In 2009, Blanchard loaned his musical voice to Louis the Alligator in The Princess and the Frog. He has completed scores for Lee's Miracle at St. Anna, the soundtrack for Darnell Martin's Cadillac Records and Guy Moshe's adventure thriller Bunraku (Demi Moore, Woody Harrelson and Josh Hartnett). Other film music written by Blanchard includes Kasi Lemmons' Eve's Bayou and Talk to Me, Oprah Winfrey's Their Eyes Were Watching God, Tim Story's Barbershop and Ron Shelton's Dark Blue.

Blanchard's music was also recently seen in Spike Lee/HBO's If God's Willing And The Creek Don't Rise, commemorating the fifth anniversary of the Hurricane Katrina disaster and the sequel to the critically-acclaimed 2006 film, When The Levees Broke. The film shows the current state of Blanchard's native New Orleans five years after Hurricane Katrina, and follows the lives of several individuals and their families in the aftermath of one of the worst disasters to occur in U.S. history. Blanchard won a Grammy for his 2007 CD A Tale of God's Will (A Requiem for Katrina), which included tracks from Levees.

Terence Blanchard has established himself as one of the most influential jazz musicians and film score masters of his generation, a member of a jazz legacy that has shaped the contours of modern jazz today. With more than 29 CD's to his credit, Blanchard is a four-time Grammy Award winner and has received multiple Grammy nominations as well as a Golden Globe nod. His latest CD, “Choices," was released by Concord Jazz in 2009 to widespread critical acclaim. Recorded in New Orleans at the Ogden Museum Of Art—itself a survivor of Hurricane Katrina—"Choices" addresses the choices we all make in life&#151both as a society and on a personal level. Guest artists on “Choices" include writer, speaker, educator and activist Dr. Cornel West and singer, musician and composer Bilal. West performs spoken word pieces on the album with Bilal providing vocals on several of the tracks.