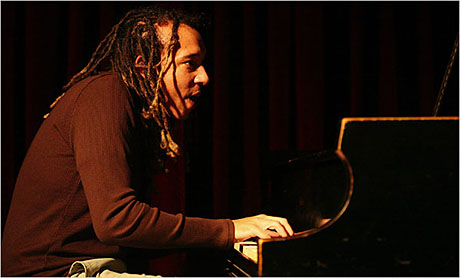 slideshow
After much anticipation, the new Gerald Clayton trio record, Two Shade has been released on ArtistShare. The album features Joe Sanders on bass and Justin Brown on drums.

At the age of 25, Clayton is already a veteran of the Jazz music scene and has built a strong following through his extensive work with the top musicians in the field such as Roy Hargrove, Diana Krall, Hank Jones, Kenny Barron, Mulgrew Miller, Lewis Nash, Al Foster, Terrell Stafford, Clark Terry, Benny Green, and, of course, The Clayton Brothers (which includes his father the bassist John Clayton and his uncle saxophonist Jeff Clayton).

From the first notes of Two-Shade, it is clear that Clayton has not only learned from the great Jazz masters before him but he embodies the spirit and and the language of these great musicians. With the technique of Oscar Peterson, the rhythmic and melodic inventiveness of Monty Alexander, the compositional approach of Billy Childs, and the solid left hand underpinning of his father John, the results are not only stunning but fresh, original and distinctly the music of today. Citing influences ranging from Freddie Hubbard to the Fugees, it is also clear that Gerald is a leader of the new generation of young Jazz musicians equally dedicated to both tradition and innovation.

In Gerald's own words:
I have listened to lots of different musical styles as long as I can remember. I continue to absorb all these influences and in doing so create my own voice by combining their forces into a harmonic whole, I seek to blend the various styles and sounds I love into a balanced, tasteful musical language.
--Gerald Clayton

Continuing in the spirit of innovation, Two-Shade is a fan-funded project through the ArtistShare label which has produced 4 Grammy award winning Jazz CDs and 11 nominations since 2004.