With rich harmonies and melody lines, his musical language takes influence from the particular guitars and effects he uses. 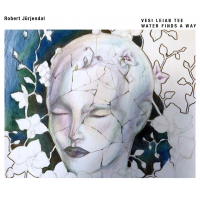 slideshow
“One can take the album Water Finds A Way as a coded story. Instrumental music has the power of imagination. It doesn't say directly, the hidden meaning behind the title may be something else. I call this ‘coded.’ It carries a secret which I can't open up to the end. I’m sure that a sensitive listener will find his/her own way into this complex world of music and art.” —Robert Jürjendal, Aaviku Farmstead Studio, Estonia

Water Finds A Way continues the colorful guitar/effects-based conception that Jürjendal began with his previous three solo efforts. With rich harmonies and melody lines, his musical language takes influence from the particular guitars and effects he uses. A graduate of Robert Fripp’s Crafty Guitar School, Jürjendal became a member of Toyah Wilcox’s band as well.

On the new album, Robert plays his new custom-built electric guitar- a fully equipped system containing a Sustainer pickup which gives a life for the long-sustained notes. Using a guitar synth (though it's hard to recognize) mixed with natural guitar sounds creating a unique hybrid.

Robert’s previous release, Simple Past (Strangiato Records, 2016) was more rock-oriented, featuring one of the best Estonian drummers, Andrus Lillepea. On Water Finds A Way Robert doesn't use drums, except some percussion played /programmed by himself. WFAW is also a “family-affair,” as Robert’s wife, Signe, joins him for background vocals and there are beautiful themes and improvisations played on cello by Robert's son Anti Jürjendal.

For the first time on one of his solo albums, Jürjendal requested a track from an outside composer, Venezuelan synthesist Miguel Noya. Noya contributes Grey and Blue. The two had previously collaborated on the 2019 NEWdOG album, The Power of Distance, as well as (with Paul Godwin) Samliku (NEWdOG 2018). They are also members of the new international ensemble project from Eternal Return Once Only, due out February 23, 2021 on NEWdOG.