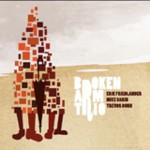 “ Broken Arm Trio...is stunning – both in what it does and how well they do it.” --The Village Voice

“Incredible musicianship and vast improvisational vocabulary.” --All About Jazz

The critics have spoken, and the accolades are unanimous in support of cellist Erik Friedlander’s recently released CD, The Broken Arm. The Broken Arm highlights Friedlander’s unique pizzicato playing--higher and more incisive than the bass, warmer than the piano, but similarly rhythmic and able to freely engage in the give-and-take that is so essential to jazz.

This March, Friedlander, who, along with the CD’s Trevor Dunn and Mike Sarin, are the Broken Arm Trio, will tour along the east coast in support of the CD. The brief tour will begin on March 26 in Philadelphia, followed by shows in Brooklyn, Cambridge, and Baltimore. Full tour date information is below.

Friedlander grew up in a home filled with art and music. He is the son of Lee Friedlander, an art photographer known by musicians and jazz aficionados for the cover photographs he took for Atlantic Records. His passion for R&B and jazz greatly influenced Erik, whose earliest memories are of a household filled with the sounds of his father's subjects--Ray Charles, Aretha Franklin, McCoy Tyner, Ornette Coleman, and John Coltrane. He started playing guitar at age 6 and added cello two years later. Trained in jazz performance traditions in his late teens and twenties, Friedlander chose to immerse himself in New York's Downtown scene in groups creating a more modern jazz tradition, working with artists such Dave Douglas, Joe Lovano and John Zorn. He has not only backed John Zorn, Laurie Anderson, and Courtney Love, he has also recorded nine CDs as a leader. Whether playing solo or with one of his bands, Friedlander pushes the limits of what the cello can do, while maintaining a firm grasp on its traditions. Pitchfork Media said, “Erik Friedlander can do things with a cello that should have a reasonable listener fearing for her life." And LA Times wrote,"Friedlander's performance clearly positions him as the first potential star performer on his instrument."

Joining Erik on The Broken Arm are drummer Mike Sarin and bassist Trevor Dunn, both first-call players on the New York scene. Trevor is a co-founder of the avant-rock band Mr. Bungle, plays with Electric Masada, and leads his own jazz-inspired Trio-Convulsant. Mike is one of the most inventive drummers on the scene, making his name first with the Thomas Chapin Trio and then with Ben Allison, David Krakauer Myra Melford, Drew Gress and many others.

To request a review copy of The Broken Arm, jpegs or an interview with Erik, contact Cary Goldberg at [email protected] Visit Erik’s website, erikfriedlander.com for additional information.