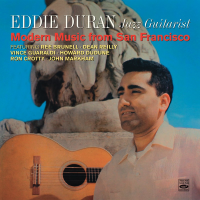 slideshow
Guitarist Eddie Duran was best known as a member of vibraphonist Cal Tjader's groups from 1954 forward and in pianist Vince Guaraldi's ensembles from 1962 onward. What all three musicians had in common was a San Francisco upbringing and marvelous musical taste. Unlike Tjader, Guaraldi and Dave Brubeck, another Bay Area native, Duran preferred to work as a sideman. A licensed barber, he also liked to stick around the Bay Area, accompanying many jazz artists who passed through the city. In the late 1940s and early '50s, he performed with his brothers, Manny and Carlos. By the  late 1950s, he played in the CBS Radio Orchestra in San Francisco on radio station KQW. Duran then toured with Benny Goodman in the 1970s and early 1980s.

In 1957, Duran recorded one of his three leadership albums—Jazz Guitarist (Fantasy). Duran's name surfaced recently when I posted on Herbie Steward's Three Horns. On Jazz Guitarist, we hear Duran out in the open and his playing is spectacular. He was backed by Howard Dudune (cl,ts), Dean Reilly (b) and John Markham (d). The tracks are My Inspiration, Soon, Rise 'n' Shine, My Shining Hour, Taking Life Easy, Why Not, A Room With a View, Skyliner, It Could Happen to You and Sugar.

Also included on the Fresh Sound release of this album are tracks from Ron Crotty's Modern Music From San Francisco in 1955 and The Ree Brunell Trio in 1956, with Dean Reilly on bass and Brunell singing the vocals. What you'll hear in all cases is a strong, swinging, clean-playing guitarist with a spectacular technique akin to Tal Farlow who should be better known today.

Here's Duran in 1980 performing an astonishing Prelude to a Kiss with Benny Goodman loitering, watching and then being blown away...