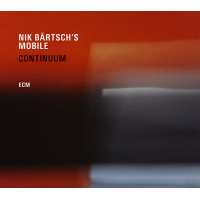 After three studio albums [Stoa (2006), Holon (2008) and Lyria (2010) plus one live- double-CD (2012)] with his electric band Ronin, Swiss keyboardist/composer Nik Bärtsch now presents a new album with his original group Mobile (whose line-up overlaps with the current Ronin cast). Mobile, originally founded in 1997 (and on the new album augmented on three tracks by a string quintet), is at the source of Bärtsch’s ritualistic approach to music making. This approach has been formed by his work with concepts of reduction and repetition as well as his fascination with Japanese culture. Here textures from jazz, funk, new music, minimal as well as ritual music are organically interwoven in the service of an energetic group sound. Continuum was recorded at Lugano’s RSI studio in March 2015 and produced by Manfred Eicher.