SOURCE: ALL ABOUT JAZZ
November 18, 2017
Sign in to view read count 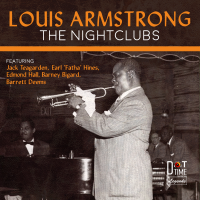 slideshow
Dot Time Records (DTR) is honored to announce that it has released Louis Armstrong: The Night Clubs, the second in a series of previously unreleased recordings, under its 'Legends' series.

This recording contains selections from five different nightclub engagements—Bop City in New York in 1950, Club Hangover in San Francisco in 1952, Storyville in Boston in 1953, Basin Street in New York in 1955 and the Brant Inn in Ontario in 1958— featuring five different iterations of Armstrong’s All Stars, featuring top sidemen such as Jack Teagarden, Barney Bigard, Earl “Fatha” Hines, Arvell Shaw, Cozy Cole, Marty Napoleon, Milt Hinton, Barrett Deems, Edmond Hall and more. The exciting nightclub performances on this collection are not only being released for the first time, but every track is taken from the Research Collections of the Louis Armstrong House Museum, with the majority emanating from Armstrong's personal reel-to- reel tape collection. This important new release once again demonstrates with finality that Pops was always tops.

Jazz aficionado Jerry Roche, who heads the Legends Series for DTR, was in search of undiscovered gems by Armstrong and was stunned by what he found when researching in the Queen’s College Archives Department. “When I heard this music by Louis Armstrong", said Roche, “I was totally overwhelmed. Producing this music would mean people could connect with the greatness of Louis Armstrong with music never-before released commercially. I made it my mission to make the music available.”

Oscar Cohen, who was Louis Armstrong’s manager and is the sole and exclusive agent for the Louis Armstrong Educational Foundation, Inc. and the estate of Louis Armstrong said, “Louis Armstrong is the most beloved and iconic artist of our time. His sound, his voice, his love—he forever touches the hearts of people everywhere”. Lisa Cohen, Vice President of Associated Booking Corp. and on the board of directors of LAEF said, “We are so happy to be working with Dot Time Legends to bring more of Louis Armstrong’s beautiful recordings to the world, to hear the music and feel the love”.

Dot Time Records, the jazz, soul and world music label based in New York and Europe, launched their “Legends Series” in 2015 featuring previously unreleased historical recordings from many of the greatest legends of the jazz genre including Ella Fitzgerald, Gerry Mulligan, Buck Clayton and more. All recordings are painstakingly restored and re-mastered with the goal of presenting these recordings in a modern format while striving to keep the original atmosphere of the recordings intact.

About The Louis Armstrong Educational Foundation

The Louis Armstrong Educational Foundation, Inc. was founded and funded by Louis Armstrong in 1969 to give back to the world “some of the goodness he received." The Foundation is dedicated to perpetuating the legacies of Louis and Lucille Armstrong throughout the world with various initiatives which include fostering programs, workshops and lectures in schools on the history of music education, as well as supporting access to instruments and scholarships; assisting and contributing to schools and libraries for events and programs designed to educate students about jazz, sponsoring programs at all school levels to aid students in developing musical skills and supporting music therapy.