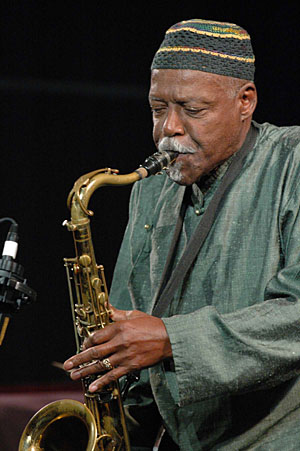 David “Fathead" Newman was born in Corsicana, Texas on February 24, 1933. His family soon moved to Dallas, where they settled and David stayed through graduating Lincoln High School. After school, David found gigs in local bands. He received a scholarship to Jarvis Christian College where he studied theology and music.

After two years of college, David decided to go on the road full time with Buster Smith (Charlie Parker's mentor). The band played lots of one-nighters and dance halls, touring Texas, Arkansas, Oklahoma, and sometimes California. On one of those tours, David met Ray Charles.

Ray was working as a sideman with another group on the night's roster. They immediately bonded, both musically and as friends. When Ray started his own band, he called on David to be part of his group. In 1954, David began a twelve year association with the Ray Charles Band. David began as the baritone player and soon became the star tenor soloist.

He returned to Dallas for a short time and led his own bands. Then he moved to New York City where his career took off in many directions.

Newman recorded many albums for Atlantic records, as well as Warner Brothers and Prestige. During this time in NYC, David gigged with Lee Morgan, Kenny Drew Sr., Billy Higgins, Kenny Dorham and so many other of the great jazz musicians hanging out on the New York scene. He gigged around the East Coast with his own quartet and soon began touring Europe and Japan as a leader.

As a studio musician he was very busy working on lots of recording projects with the likes of Herbie Mann, Aretha Franklin, Hank Crawford, Aaron Neville, to name a few. After meeting at a studio session, David joined forces with Herbie Mann during “The Family of Mann" era. Cal Tjader (later Roy Ayres) were part of this outstanding group.

It was now time for David Newman to focus on his personal choices and let the public know more about the music that he chose to play. In 1980, Newman, determined to pursue his own musical identity, recorded several mainstream jazz albums for the Muse label. Artists such as Cedar Walton, Jimmy Cobb, Buster Williams, Louis Hayes, and other fine NY musicians, helped round out the rhythm sections.

David returned to Atlantic Records in the late eighties to record several albums. One of he recordings was done live at the Village Vanguard in NYC, featuring Stanley Turrentine and Hank Crawford.

Newman's next recordings were on the Kokopelli label. This was a new label owned by Herbie Mann. David recorded a beautiful CD in tribute to Duke Ellington, titled Mr. Gentle, Mr. Cool. David produced the next one on Kokopelli, titled Under A Woodstock Moon.

The late nineties brought David to the High Note label where he has recorded six successful CDs. The most recent, I Remember Brother Ray, was released in January 2005 and became the #1 Most Played Jazz Album nationwide.