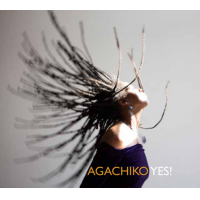 Gabrielle Agachiko has been turning heads since 2008, when the septet led by Kenyan-born, Boston-based vocalist Gabrielle Agachiko was formed. On her debut album Yes!, to be released July 9 by Accurate Records, she brings an international sensibility to the incantatory spirit of Nina Simone and Abbey Lincoln.

Whether gracefully delivering a pointed political message on “Words,” soulfully crooning Buddy Johnson’s love-struck blues ballad “Since I Fell for You” (complete with the rarely sung verse), investing Nina Simone’s “Four Women” with empathy and anger, or adding lyrics to a new piece by Ethiopian jazz legend Mulatu Astatke at his invitation, Agachiko is first and foremost a master storyteller.

“I’ve loved these songs and styles since I was in my 20s, for their emotional depth and musical complexity,” says the vocalist, who had a long and fruitful career in indie rock and Off-Broadway musical theater before circling back to jazz. “However, at 20-something, I didn’t feel I had the life experience needed to truly convey the meaning. Like any important conversation, jazz must be engaged in at length in order to be well understood. Now, it seems the conversation of life has enabled me to fill these songs with what they deserve.”

By the album’s title track closer, a wary but insistently upbeat affirmation, Agachiko leaves no doubt about her prowess as a jazz musician, her skills as a songwriter, and her vision as a bandleader who knows how to bring out the best in her collaborators. “I’m always listening to these guys having a conversation,” she says. “When you add vocals, you have to make the words count. It has to be about something—love, loss, pain, sorrow, or joy.”

“Gabrielle holds a universe of sound in her voice,” Gershon says. “It’s so rich and subtle and controlled. Her voice will just do anything, and she knows a gazillion songs. As an arranger who’s very concerned with timbre, voicings, and the emotional content of intervals, I appreciate that she hears it all and can wrap around a chord sequence. It’s very different from writing for a blues shouter who wants a lot of punch and Basie flourishes.”

Born in Nakuru, Kenya in 1958 to a Kenyan father and African-American mother from Georgia via New York City, Gabrielle Agachiko spent her childhood in East Africa and experienced the rush of optimism and energy following Kenya’s independence in 1963. She grew up hearing her father play percussion along with Max Roach albums and her mother blast James Brown on the hi-fi, and felt called to the stage as a performer. At the age of 12 she moved to England to study, but spent several summers and two intermittent years in the U.S., culminating with a move to New York City at 17.

Agachiko completed her studies at Juilliard as a voice student, and had the opportunity to spend several weeks singing with Steve Lacy in Paris. She found herself drawn to musical theater, realizing that acting helped her find her voice as a singer. In the early 1990s, while working with the Boston rock band Atom Said, she got to know Gershon, who was also active on the Boston rock scene. In fact, he didn’t realize she had deep jazz roots until almost two decades later, when she resurfaced in Boston after several years away. Greatly impressed by the first incarnation of the band Agachiko, which was primarily a Nina Simone project, he realized that “she’s not a jazz singer in the daughters-of-Ella mainstream. She wasn’t singing the same 50 tunes as so many jazz vocalists. She’s not working out of the same playbook.”

In celebration of Yes!, Agachiko brings her vibrant music to the stage this summer with performances at Accurate Records, Somerville MA (7/13) and Somethin’ Jazz, New York City (8/10), and other dates to be announced.