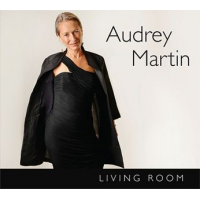 At its best music can heal the sick and soothe the soul, refresh the spirit and embolden the meek. Audrey Martin experienced first hand the power of a song to provide hope and emotional sustenance in the darkest of times. With her captivating debut album, Living Room, the Berkeley jazz singer shares a lifetime of wisdom with a highly personal repertoire that gracefully encompasses gems from the American Songbook and treasures from pop and jazz singer/songwriters such as Laura Nyro, Joni Mitchell, Abbey Lincoln, and Blossom Dearie. Living Room is scheduled for release on August 26, 2014, on Blue Hydrangea Records.

“The songs that I recorded are all pieces I’ve been singing and working on for several years,” Martin says. “These are songs that I love and that have really touched me.”

An album of bracing maturity, Living Room is not the work of a dewy ingénue. Rather, like some of the era’s most incisive jazz singers (René Marie and Judy Wexler come to mind), Martin dedicated herself to mastering the art form at mid-life. Possessing impeccable taste and blessed with a gloriously warm and clear voice, she makes every note count. More than setting a mood, Martin renders strikingly vivid scenes, from the beatifically becalmed (“Lazy Afternoon” and “Calling You”) to the quietly tempestuous (“I Never Meant to Hurt You” and “Wild Is the Wind”). It’s not much of a stretch to hear her training and experience as a psychotherapist deeply informing her sensibility as a singer.

“I’m attracted to the chance to communicate the emotion of a lyric sensitively and in a deeply felt way, to find my way into the world of a song so that I am speaking to the listener,” Martin says. “As a therapist I hold the deeply felt and personal life stories of my patients, and as a vocalist I get to tell my own story and the stories of others through song.”

“Larry is such a sweet man and from the beginning he’s been an irreplaceable part of this journey,” Martin says. “When I showed him what I wanted to do for my first concert, his response was, ‘this is very ambitious.’” What attracted me to jazz from the beginning was the room it provides for improvisation and personal expression. There’s freedom to experiment and make the songs my own, and I can work with these amazing musicians who are in communication with one another on the stage, developing new language while at the same time adhering to the tune.”

One of the many pleasures of Living Room is that Martin knows her way around a standard, improvising at the edges of a tune while infusing it with smoldering passion. Undaunted by drawling tempos, she captures the languorous sensuality of “Lazy Afternoon,” an interpretation inspired by the great Sheila Jordan. But it’s no lazy breeze blowing through her briskly swinging rendition of “Wild is the Wind,” a sassy performance of a tune usually interpreted as a molasses ballad.

In much the same way that “Body and Soul” is a rite of passage for tenor saxophonists, singing Bobby Troupe’s “The Meaning of the Blues” is almost a prerequisite for attaining a torch song degree, and Martin passes with flying colors. Her aching rendition leaves no doubt about her love for Irene Kral (a jazz original whose recordings should be studied by many more of today’s singers). She’s equally convincing expressing unbridled joy, bringing a fierce edge to the pleasures enumerated in “My Favorite Things” and swooning romance to Ray Noble’s chestnut “The Touch of Your Lips.”

Some listeners might be drawn to Living Room by Martin’s more contemporary material, songs that she investigates with the same emotional acuity and intelligence as the standards. She captures Leonard Cohen’s incantory cadence on “Hey, That’s No Way to Say Goodbye,” Blossom Dearie’s knowing innocence on “I Like You, You’re Nice,” and Joni Mitchell’s wary but life-electrified revelations on “Blue.” No artist touched her more deeply however than Laura Nyro, who’s represented by the wondrously ingenuous “I Never Meant to Hurt You” and the transporting “Upstairs By A Chinese Lamp.”

For Martin, Nyro’s music provided a lifeline during a period of crisis in her adolescence, when depression led to a lost year. The songs pierced the darkness, providing sustenance and inspiration. “The music really saved me,” Martin says, “particularly Nyro’s early albums ‘Eli and the Thirteenth Confession,’ ‘New York Tendaberry’ and ‘Christmas and the Beads of Sweat.’”

Born on May 22, 1957 in Chicago, Illinois, Martin grew up in the Chicago area surrounded by the arts. In the 1950s her reed-playing father had led a jazz combo in Chicago with drummer Red Holt and bassist Eldee Young, future Ramsay Lewis sidemen who also recorded as Young-Holt Unlimited. Though he was no longer gigging in the ‘60s, he instilled in her a love of jazz, and she gravitated to Billie Holiday, Irene Kral, and Sarah Vaughan. Her parents fed her creativity with early training in ballet and guitar, and at 12 she performed in the role of Emmie Spatchett in Benjamin Britton’s opera “Albert Herring” at the University of Wisconsin.

While she studied theater, classical voice and dance for several years in college, she ended up graduating from Mills College with a degree in psychology, and eventually earned an MA in clinical psychology. Licensed as a marriage and family therapist, she plunged into a satisfying practice, but her long sublimated need to make music wouldn’t go away. In 1997, shortly after the Jazzschool opened in Berkeley, she went in and started the long journey to recording Living Room.

“When I turned 40 I decided I had to do something,” Martin recalls. “It had been eating away at me. I always loved music, but I had gone on a different track. I loved my work but something was missing. When the Jazzschool opened up I walked into Stephanie Bruce’s studio with the music from Laura Nyro’s ‘Billy’s Blues,’ and sang it for her, and that was the beginning.”

Over the next 12 years, Martin studied with many of the region’s most acclaimed singers and educators, including Ellen Hoffman, Maye Cavallaro, and Faith Winthrup. She participated in the advanced vocal program with Laurie Antonioli at JazzCamp West, and the Stanford Summer Jazz Program for Vocalists, working with Madeline Eastman and Dena DeRose. By 2010, she completed the Jazzschool’s vocal mentorship program with Maye Cavallaro, which culminated with her sold-out concert debut at the Jazzschool. She’s produced a series of sold-out concerts at venues around the East Bay, collaborating with top Bay Area jazz artists. A successful Kickstarter campaign funded the production of Living Room, a startlingly beautiful album by an enthralling new voice. Unsentimental and unflinching, Martin knows the soul-deep power of music because at the most crucial moment in her life the music reached her soul, and that memory animates every song she sings.