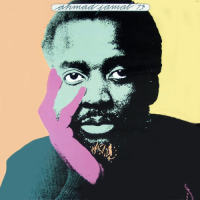 slideshow
We tend to think of Ahamd Jamal as a pioneer of the elegant jazz trio, a style he perfected in the 1950s by making ample use of space, swing and the upper register of the piano keyboard. Or we think of Ahmad's more recent abstract recordings that are bold and percussive. In between, there was a brief period when Ahmad recorded on the Fender Rhodes electric piano. He released only three studio albums on which he recorded extensively on the instrument. Of course, all three albums for 20th Century Fox albums came out in the 1970s.

No instrument reminds more of that decade. We can thank CBS for the Fender Rhodes, which is notable for its warm bell-like tones. Invented by Harold Rhodes after World War II as a budget keyboard for returning soldiers, CBS bought Fender in 1965, and Harold Rhodes remained with the company. Student models were released in the late 1960s, and the familiar 73-key model was first produced in 1970. As the electric instrument rapidly became popularity, other models were manufactured. The company was sold to Roland in 1987 before Rhodes bought it back in 1997. He died in 2000. Today, the Rhodes electric piano is sold by Rhodes Piano.

Ahmad's first studio album featuring the Fender Rhodes was Ahmad Jamal '73, on which he's accompanied by an orchestra conducted by Richard Evans. It's a soul-jazz masterpiece in sync with the times. I've always viewed this album as a concept recording, to be heard from beginning to end, and it's one of my favorite Fender Rhodes recordings. Every song is beautifully articulated and includes a few hits of the day, including War's The World Is a Ghetto; Stevie Wonder's Superstition; The Stylistics' Children of the Night, by Thom Bell and Linda Creed; and Ratwani Za Yemeni's Sustah, Sustah.

The second album Ahamd recorded mostly on the Fender Rhodes was Jamaica (1974). He was backed by Richard Evans and Jamil Nasser (b), Brian Grice and Frank Gant (d), Marilyn Haywood, Vivian Haywood, Jimmy Spink, Morra Stewart and Charles Colbert (vcl), as well as an orchestra. The Stylistics' Ghetto Child by Thom Bell and Linda Creed opens the album, followed by Trouble Man by Marvin Gaye; Leon Sylvers' Misdemeanor; and Johnny Mandel's Suicide Is Painless from M*A*S*H.

The third and final Rhodes album by Ahamad was Jamal Plays Jamal (1974), which featured six original compositions. Here he switched between the Fender Rhodes and the piano. Ahmad was backed by Jamil Nasser (b), Frank Gant (d) and Azzedin Weston (congas).

Ahmad Jamal is still active today. His most recent album is Ahmad Jamal: Marseille, which you can hear at Spotify.