A Stamp of Approval for Jazz 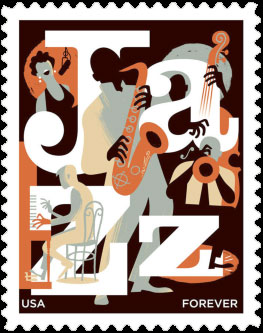 We're a society of pack rats, of collectors. Or so it seems. Some of us collect a few things we find meaningful, others have made it into a warehouse-style art form.

In general, jazz fans collect live music memories and savor the special moments. Many collect them in hard copy as well&#151CDs, LPs, 78s, images. You name it. Well, probably not eight-tracks. At least now without suffering some level of derision.

But collect we do.

When I was a kid, I was into stamp collecting, and kept up with specialty categories for a couple of decades. The philately bug in me waned after a while. But once in a while, there is a linkage with current interests that brings things full circle.

Next Saturday the U.S. Postal Service will issue a commemorative stamp saluting jazz. The first day of issue will take place in New Orleans. That's most fitting in its history as one of the music's most influential cities, and, many argue, its birthplace.

The Postal Service says it is paying tribute to America's musical gift to the world and to the musicians who make it (along the veins of the 1995 stamps, first issued at the Monterey Jazz Festival, that honored Louis Armstrong, Eubie Blake, John Coltrane, Erroll Garner, Coleman Hawkins, James P. Johnson, Charles Mingus, Thelonious Monk, Jelly Roll Morton and Charlie Parker). The latter were part of a Legends of American Music series.

The new stamp, which will be sold initially at 44 cents, is part of USPS's popular “Forever" series. It means that these pressure-sensitive adhesive stamps can be used into the future regardless of any further rises in the cost of a first-class stamp. The first such stamp, still in widespread use today, was issued in April 2007 and features the Liberty Bell. Since that time, more than 28 billion Forever stamps have been sold, USPS says.