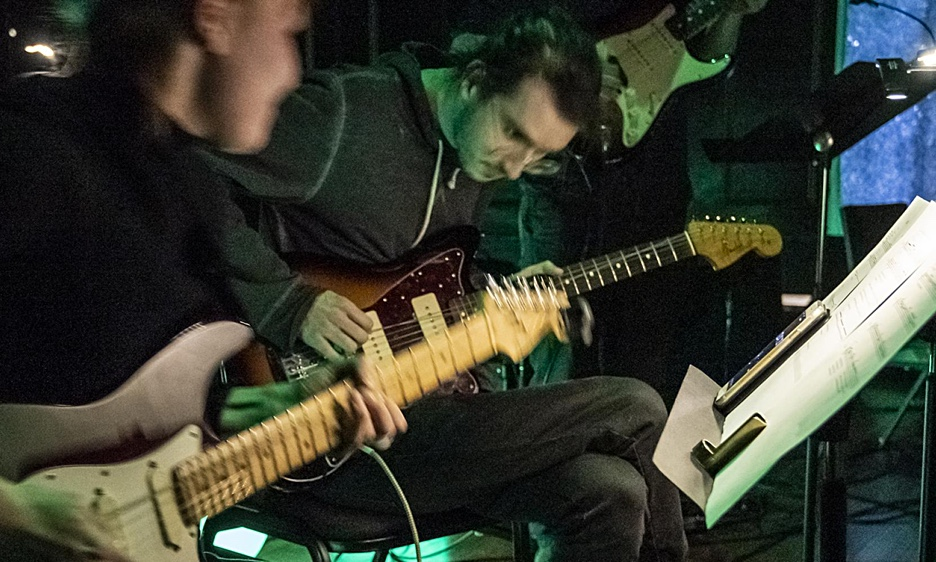 Concerts, residencies and conservatory-wide collaborations during the 2022-23 season feature Jaap Blonk, Satoko Fujii, Daniel Levin, Fay Victor, Aoife O’Donovan, Don Byron. Festivities kick off in September and close in June with a week of internationally broadcast performances from around the globe.

Since 1972, the Contemporary Musical Arts (formerly CI/Contemporary Improvisation) program at New England Conservatory has been at the forefront of creative musical expression. The department marks five decades of crossing boundaries, pushing limits, and training creative contemporary musicians and artists with a year- long celebration featuring faculty, students and alumni in a full season of cutting-edge musical events.

The celebration closes with NEC Contemporary Musical Arts Coast to Coast and Around the World, a week of performances all over the globe, organized by CMA alumni, faculty, and current students, to be broadcast internationally during June 2023.

Most events are free and open to the public. Some events will be livestreamed at the time of the performance and others will be broadcast at a later date.

A day-long series of workshops with NEC Contemporary Musical Arts program faculty offer NEC conservatory and prep students the opportunity to get outside of their comfort zones and try something new. No experience with global music or improvisation necessary.

For more than 25 years, pianist Satoko Fujii has created unique, personal music that spans many genres, blending Black improvisational music, contemporary European concert music, rock, and traditional Japanese music into a compelling synthesis that is instantly recognizable as hers alone. A prolific composer for ensembles of all sizes and a performer who has appeared in concert throughout the world, she was the recipient of a 2020 Instant Award in Improvised Music, in recognition of her “artistic intelligence, independence, and integrity.”

Based in the Netherlands, vocal sound artist Jaap Blonk is unique for his powerful stage presence and almost childlike freedom in improvisation, combined with a keen grasp of structure. He has performed around the world, on all continents. In recent years his concerts have taken on dramatic new dimensions with the incorporation of live electronics and interactive visuals.

Sunday, November 13 – “Living with Imperfection: A Portrait of Ran Blake”

Ken Schaphorst directs the NEC Jazz Orchestra with special guest clarinetist Don Byron and soloists from the CMA program in repertoire ranging from his own Film Noir interpretations to music inspired by diverse global and improvisational traditions. The program includes a tribute to NEC’s own George Russell along with arrangements and compositions by Randy Weston/Melba Liston, Anthony Braxton, and others. Byron will also conduct a talk about his music and a master class.

Residency features singer/songwriter and CMA alum O’Donovan in conversation with CMA co-chair Eden MacAdam-Somer about her work and career, and a masterclass for NEC singer-songwriters.

NEC CMA alum Aoife O'Donovan is an American singer and songwriter based in Brooklyn. While she is best known as the founder and frontwoman of the string band Crooked Still, she is also one-third of the female trios Sometymes Why and I'm with Her, and has appeared on the Prairie Home Companion radio program. Her collaborators have been numerous and stylistically wide-ranging, including such varied artists as jazz trumpeter Dave Douglas, cellist Yo-Yo Ma, Stuart Duncan, Edgar Meyer, and Chris Thile's Goat Rodeo Sessions band, the Boston Pops, and Kronos Quartet. She has become a go-to vocalist in the American contemporary folk, bluegrass, and progressive Americana scenes, working with Jerry Douglas, Sarah Jarosz, Darol Anger, and the Infamous Stringdusters. After a pair of EPs, O'Donovan issued her acclaimed solo long-player, Fossils, for Yep Roc in 2013. The following year at the Telluride Bluegrass Festival with Sara Watkins and Sarah Jarosz led to the formation of the touring outfit I'm with Her. They released their debut, See You Around, for Rounder in 2018 and won a Grammy for Best American Roots Performance at the ceremony in 2019. O'Donovan delivered her third solo album, the Joe Henry-produced Age of Apathy, in 2022.

Fay Victor is an improvising vocalist, composer, lyricist and educator riding all the chasms and seams of musics that are improvisational and conversational in nature. A Brooklyn-based sound artist/composer, she hones a unique vision for the vocalist’s role in jazz and improvised music. Victor utilizes a distinctive vocalizing, language and performing approach with the foundation of the jazz vocal idiom, now encompassing an “everything is everything” aesthetic, bringing in references that span the globe. Victor sees the vocal instrument in itself as full of possibilities for sound exploration, the voice a direct and powerful conduit for language and messages in an improvising context. All of these ideas aim to push the vocal envelope to forge greater expressive possibilities. In Victor’s 10 critically acclaimed albums as a leader one can hear the through line of expansive expression leading up to her most recent release, BARN SONGS (Northern Spy Records) with her Chamber Trio featuring Darius Jones (alto saxophone) & Marika Hughes (cello).

June | Contemporary Musical Arts Coast to Coast and Around the World

A week of performances all over the globe, organized by NEC CMA alumni, faculty, current students. Broadcast internationally online.

Founded in 1972 by Gunther Schuller and Ran Blake, NEC’s Contemporary Musical Arts program, originally called Third Stream, prepares musicians for today's musical world. The department brings together a diverse group of the world’s finest young artists in a setting where they can grow in a community of composers, performers and improvisers. This year NEC changed the name to Contemporary Musical Arts to acknowledge the breadth of the program’s training. With an emphasis on detailed listening to and performance of diverse oral musical traditions, advanced aural skills, conceptual ideas and interdisciplinary collaboration, the CMA program is uniquely positioned to cultivate the complete 21st century global musician.

“Since Blake and former NEC President Gunther Schuller founded the CI Department in 1972, the program has attracted some of the world’s finest faculty and students.” —Nelson Brill, Jazziz

“Begun under the fiercely adventurous Gunther Schuller as an extension of his ‘Third Stream’ ethos – essentially an initiative to blend jazz and classical music – the program has evolved into one of the most versatile in all of music education. In its existence, it’s gone from musical curiosity to an honored incubator for musicians looking to follow in the footsteps of musicians like John Medeski, Anthony Coleman, and Don Byron.” —Matt Parrish, JazzEd