By GLENN ASTARITA
September 28, 2007
Sign in to view read count 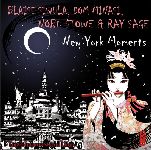 No frills or trickery enacted here, as its all about a collective of like-minded musical spirits letting the chips fall where they may. This quartet stokes the coals and generates some high-heat during this rollicking and stimulating improv fest recorded at The Studio in New York City. New York Moments also serves as the companion for the trio date, Brooklyn Moments (Konnex, 2007), featuring the same personnel sans the services of guitarist Dom Minasi.

Multi-reedman Blaise Siwula sparks the chain of events with darting, voracious and frenzied lines, often complemented by Minasi's swift, single note voicings. IThe quartet expands and contracts like a rubber band, while occasionally erupting into volcanic escapades. Pianist Nobu Stowe launches "Quartet IIb with a pensive framework that gravitates to ascending choruses, firmed-up by drummer Ray Sage's turbulent polyrhythmic attack. Here and elsewhere, the musicians execute ascending motifs as though they're trying to attain a zenith, or point of no return.

The customary, free-form style peaks and valleys shine glitteringly, where Stowe often rolls off Sage's energized patterns amid the lead soloists' excitable exchanges. With "Quartet IIa, Siwula's turbulent soprano sax attack rides above his band-mates' thrusting impetus. But they simmer the seething flow after making entry back into the atmosphere on the final piece, "Quartet I.

The artists generate an outward and forward-moving impetus that doesn't convey any hint of introversion. It's a no-holds barred workout that could parallel the bustle of metro New York, its darting and glancing rays of light veering off into an aggregation of incalculable directions. Avant-jazz at its very finest.