BY JOHN EYLES
December 7, 2018
Sign in to view read count
If you were told that a record label's latest batch of three albums were by Jürg Frey, Clara de Asis and Stefan Thut, and then asked to identify the label, which one would you be most likely to choose? Many in-the-know music fans might be likely to opt for Another Timbre or maybe Wandelweiser or INSUB, none of which is the correct answer. In fact, albums by those three musicians constitute the second batch of releases from the Elsewhere label, following hard on the heels of its two impressive debut recordings released in July 2018.

No newly-formed record label arrives with a ready-made identity or reputation in the minds of music lovers; such things evolve over time, based on a label's releases, particularly in its early days. So, its third, fourth and fifth albums could prove to be important to Elsewhere and to our opinions of it...

Although its proprietor Yuko Zama has been keen to stress that Elsewhere will be her label, independent of her husband Jon Abbey's Erstwhile label, for which she continues to work, this Jürg Frey release blurs the boundaries between the two labels somewhat. Frey has two previous releases on Erstwhile, notably the five-disc epic L'âme est sans Retenue (ErstClass, 2017) which consists entirely of the six-hour piece "L'âme est sans Retenue I"—the longest of Frey's career. It was constructed by Frey in 1997-98 from field recordings that he had made in a Berlin park earlier in 1997, interspersed with periods of silence. It had never been issued prior to the ErstClass album.

Now, as one of its two tracks, 120 Pieces of Sound features "L'âme est sans Retenue II," which has a similar structure but only plays for forty minutes. Apart from their different durations, the only difference between the two is that the shorter one includes occasional subtle use of bass clarinet. Curiously, "L'âme est sans Retenue III," the sixty-six-minute third part of Frey's composition, was released back in 2008 on Radu Malfatti's B-Boim label, so anyone wishing to hear the complete work would need to acquire three separate albums on three different record labels. If that all sounds too complicated, rest assured that "L'âme est sans Retenue II" stands alone as a track in its own right and is a good way to sample the entire piece, particularly its contrasts between the mysterious, atmospheric field recordings and the silences which frame them.

That track is only half the story of this album, though. Its other track, the 2009 composition "60 Pieces of Sound," is in total contrast, being performed by the quartet Ordinary Affects joined by Frey himself. The quartet's instrumentation of cello, electric guitar, keyboards and violin allied with Frey's clarinet produces a soundscape that is an ambiguous blend, with hints of a conventional string quartet shading into a more contemporary sound. As such, it is ideally equipped to give an engaging performance of the piece's sixty chords, punctuated by silences, a structure which complements that of the album's other track, giving the album a pleasing sense of symmetry. 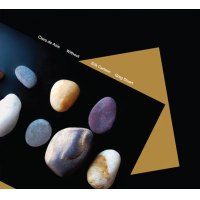 Following closely on the heels of the Clara de Asis release Do Nothing (Another Timbre, 2018), Without is an ideal complement to that recording as it highlights different facets of de Asis' music and gives a more detailed picture of it. In particular, where the earlier album consisted of six shorter tracks performed on guitar and percussion by de Asis herself, Without is very different, just featuring the forty-three-minute title track, which was written in 2018 for and performed by the duo of Erik Carlson on violin and Greg Stuart on percussion.

This realisation of the piece is characterised by the togetherness of Carlson and Stuart's playing, which itself owes a debt to the precision of de Asis' composition; by all accounts, she "gave a precise framework for the position and the duration of each sound section and each silence, as well as a rough outline for the texture and the volume of each sound, the use of tone or noise (or tone-noise), and the materials for the percussion." Of course, Carlson and Stuart are experienced players, not androids, so their own inputs are as important as those of de Asis; in other words, credit is due equally to each of the three. For the listener, the end result is a slowly-evolving but varied soundscape in which every note from both players can be heard perfectly throughout; it makes for relaxing listening which can be repeated time and again without ever becoming stale. A collective triumph. 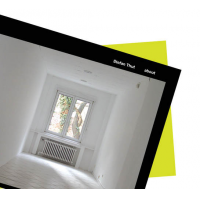 It is very fitting that a recording by the Swiss cellist and composer Stefan Thut completes this second batch of releases from Elsewhere, as many of the words already used to describe the fledgling label and its music are just as appropriate to Thut's works—ambiguous, innovative, meditative, open, restrained, subtle... to name but a few.

All of which is eloquently illustrated by the music on About, which amounts to the hour-long title track; composed in 2017, it was performed by a sextet of Thut himself on cello, with electronicist Ryoko Akama and four others chosen by him, and recorded at the University of Huddersfield in September 2017. In typical fashion, Thut's composition does not just require the sextet to play their instruments; his score instructs three performers to make percussive, ringing, and electronic sounds while three others play short high-register pitches on their musical instruments according to written scores, paying particular attention to the decay of sound in the subsequent silence. It also includes activities in between playing the sounds, such as walking about (hence the title "About") the space, and uttering monosyllabic words quietly in their own languages. Put all of that together, and the resulting piece fits the list of adjectives above, and sits well alongside the albums from Frey and de Asis.

Yes, five releases in, Elsewhere is already establishing its own distinctive sound and style (compare these three album covers for evidence) and looks set to go from strength to strength.