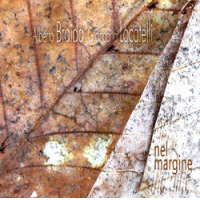 Alberto Braida and Giancarlo Locatelli recorded this album as part of the concert series In Viaggio #9 bis at Sala Vallaperti in Melzo, Italy. The two have played together in the past and have developed an understanding and chemistry that elevates their music. Each is credited with five compositions on this record with "Del Margine" being improvised. The written note may be the signpost for their journeys, but the spark that lights their path is the undefined. Coming into play are long lush landscapes, craggy terrain and some delightful nooks and crannies.

Locatelli plays with an endearing sense of melody on "P&M." He suffuses the music in clear tonality, unraveling it gracefully before he propels it into hardier pith to flesh the outing. Braida is sympathetic, his open notes adding to the spell and the beauty. The enchantment is carried to a higher level on the luminescent "Once It Was The Colour Of Saying." Locatelli is once more the lead voice, breaking up the linearity with short phrases without losing his feel for the inner nectar of the composition. Braida finds the space to forge scintillating runs, phrasing them with emphatic chords and, as he does all along, with compact harmony.

The spry, rather upbeat and convoluting "Comminare Api" darts in and around, changing tacks in quicksilver motion. It's a signal collaboration, one that underlines the empathy between Braida and Locatelli. No matter which way the latter decides to go, the former is right there as a companion and a foil.

"Dal Margine" is looser as Locatelli breathes fire into the permutations, darting, squeaking and shooting sharp volatile phrases. The improvisations are perfectly crafted with Braida disseminating ideas that turn on the landscape of rumination just as handily as they ride a swirling high tide.