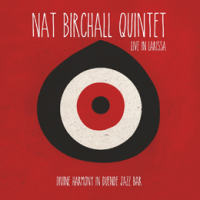 This limited double vinyl and download collection is a wonderful document of two nights that Birchall and his band played at the Duende Jazz Bar in Larissa during May 2013. The trip appears to have made an enormous impression on Birchall who commented shortly after returning that "I think our visit will become one of the defining experiences of my life..." drawing inspiration from people who were "the most spiritual, warm-hearted and generous I have ever met...."

The band that Birchall took to Greece was basically that which cut World Without Form in 2012 shorn of Andy Hay and Jon Thorne, leaving Paul Hession and Nick Blacka as the sole drummer and bassist respectively. Inevitably then 4 of the 7 compositions are taken from that set, the remainder being the title track from Birchall's previous album Sacred Dimension and two great covers that he had not previously recorded —Alice Coltrane's "Journey Into Satchidananda" and "John Coltrane" from Clifford Jordan's Glass Bead Games.

The covers are badges of influences that indicate starting points for a music that is often loosely characterized as cosmic or spiritual jazz. In Birchall's words the intention is that the music ..."transcends the notes, transcends the melody... transcend what's actually there on the face of it." When you set the bar that high it is more important than ever that the music be performed with concentration, passion and love—after all what is worse than an equivocal musical dedication to a deity or source of inspiration delivered with a shrug? Thankfully there are no such concerns here— there is a crackle and energy to opener "John Coltrane," principally from Nick Blacka's wonderful bass line and Birchall's ethereal sax, but also from the shouts and whoops from the sort of committed crowd that can push a great performance into being a truly memorable one.

The live setting has other benefits in allowing the Birchall originals to be significantly expanded upon from their studio incarnations. On pieces like "The Black Ark" the unrestricted time available gives the recording an extra edge, Birchall having the freedom to stretch out and elaborate upon his solo in the live setting that works remarkably well. Space is important and the interplay between Adam Fairhall's piano and the rhythm section of Blacka and Hession flourishes in it. "Return to Ithaca" is enhanced by the live setting Birchall's alto soaring above the Tyner- esque groove that underpins the piece with Corey Mwamba's vibes adding just the right amount of exotic atmosphere to what must have been a poignant moment playing this piece for a Greek audience.

Slower pieces such as "Sacred Dimension" typically start with a dedicatory theme and solo from Birchall before the rest of the band move in behind and take solos into free-er territory. As you might expect from such an experienced band, they sound comfortable with these excursions into complex improvisation, but somehow always keep things just the right side of melodic. This awareness of the listener allows you to be swept up in the music rather than kept at arms length as a passive spectator to emotionless technical virtuosity. It is also worth noting here that the clearer, warmer and more spacious stereo image of the vinyl mastering over the download is particularly beneficial in these free-er sections where identification of individual contributions is clearer. Should you choose to purchase the vinyl version a complimentary download is also provided.

The vinyl is a worldwide limited edition of only 500 copies and no CD is currently planned because funds do not allow. This appears to limit the audience for this fantastic music to the already committed—a great shame I think. Birchall has been treading this individual, idiosyncratic, path for some time now and deserves to be better known outside of our specialist jazz ghetto. Along with former label mate and occasional collaborator Matthew Halsall, he is proof that it is possible to thrive in even these difficult times if you stay true to the artistic inspiration and inclusive values that lead you to play in the first place. Live in Larissa is another triumph and a fitting record of what sounds like a wonderful couple of nights.