By MARTIN LONGLEY
December 16, 2008
Sign in to view read count 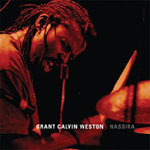 The Amulet label is operated by Billy Martin and Grant Calvin Weston is one of that sticksman's key drumming influences. It's easy to believe, given this album's swirling blend of abstraction and groove.

Nassira opens with an apocalyptic drumming statement, thundering toms and slashed cymbals raging against a building snowstorm drone. This "Earth Mover" track features Weston alone and subsequent tunes have him handling bass, keyboard and trumpeting duties, besides laying down the brutally complex drum patterns. Nearly all of the pieces are solely composed by Weston, with just one number being a group improvisation. "Earth Mover" is more like a display of Weston's general prowess than a compositional piece, but "Space Boy," "Pop Goes The Weasel" and "Let's Funk" move into an equally charged group groove mentality.

Weston sets up an ARP synth wibble and guitarist Weasel Walter joins the fray, the twosome holding great power in suspension as they hover in circles, trumpet adding to the miasma of sound. On "Pop Goes The Weasel," Walter is not actually present and the guitar-work is delivered by the more metallically inclined Jeff Monjack. Again, Weston handles everything else: drums, bass, and keyboards. This piece has more forward motion, with Gothic prog organ heralding even greater guitar contortion to climax, all underpinned by a Bootsy Collins-styled bass line. Yes, they do actually funk on "Let's Funk," though in avant fashion.

These four studio cuts make up an exhilarating run, but the following pair of live tracks sound a touch conventional by comparison. They feature a quartet with bassist Tom Spiker, keyboardist Brian Marsella and saxophonist Elliot Levin. The short "That's It" provides the disc's only quiet episode, but the 16-minute "Area 51" builds into vamping fusion that's straight out of the '70s Miles non-songbook. The vocal inserts don't succeed, though, sounding like a poor version of that indulged in by Flo & Eddie from Frank Zappa's early-'70s Mothers Of Invention.