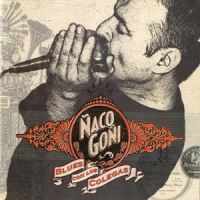 One of the best known harmonica players in Spain, Ñaco Goñi has been in the frontline of the blues scene in the country almost from its start, approximately 30 years ago. Grown out of the once celebrated musical neighborhood Prosperidad, his trajectory has been intimately linked to Madrid's particular history, where he started out when he was about fifteen playing with older pioneers and friends like Malcolm Scarpa, Whisky David, and Tonky de la Peña (with whom he recorded the groundbreaking Blues Corner (Coquette Discs, 1987)-the first blues album in Madrid).

Announcing an ambitious project with three volumes (2006, 2012), this first double CD features Goñi playing with an extensive collection of musicians from different countries and generations, "that love the blues and have been playing since the late fifties." With its focus on Madrid's live music scene, which can be thought as a significant crossroads for musicians, the record sets off with "Betica Stomp," a crude tour-de-force between Goñi's fiery harmonica and Armando Marcé's incessant drumming. This introduction, dedicated to a tavern in Prosperidad (Madrid), leads to a remarkable succession of songs with Ñaco playing with some of his long-time partners.

A sort of damned genious, Malcolm Scarpa is introduced first. In his particular rendition of "Little Laura," a Sleppy John Estes classic, Scarpa displays his distinctive personality, perfectly backed by Christian Rannenberg's rockin' piano and Goñi's intense blowing. Whisky David comes in next with the mellow "When My Babe Loves Me." A Scottish vocalist and organist, David came to Spain with the Yardbirds and stayed around until his passing in 2011, leaving an important influence on the emerging pop and blues scenes. The record also remembers one of the classic Tonky Blues Band line-ups featuring "Necesitas mucha pasta," a song that along with "Las ratas y yo" (J.Teixi Band), "Cosas que debo a Madrid" (Miguel Ríos), "Peña, peña, peña" (Ñaco y los Bluescavidas & Raimundo Amador) and "Dices que no tengo feeling" (Fede Aguado), helps to understand how blues is reinterpreted in Spanish. Most significantly, "Dices que no tengo feeling" and "Peña, Peña, Peña" both address the conflicts and implications of translating the blues to Spanish.

The second CD holds some more highlights. "Circumstantial Evidence," with Chicago-born singer Velma Powell, and a live version of "Every Day I Have the Blues" with George Jones, a New Orleans singer based in Munich, are among the most inspired. The worldwide contributions conclude with "Negro como un blues," that counts with the participation of Argentinian blues pioneer Claudio Gabis, and famous songwriter Joaquín Sabina on vocals. Standing out between some correct, varied standard versions, "Vuelvo al foro" recuperates Madrid's local identity feeling. With a contagious, humorous rhythm and "Kapo" Albuquerque's singing, the song tells the story of someone who, despite being well in other places, enjoys his comeback to his neighborhood and city.

Of course, Ñaco Goñi's personal harmonica style is present all throughout the record. His outstanding playing combines rhythm and melody, strength and sensitivity, and merges into a naturalized virtuosity that flows through winding roads and turns that concentrate feeling in bends, making the listener smile once he recognizes Goñi's language. A modest, smiling character, Goñi has undertaken his definitive recording project in the best possible way. Blues con los Colegas, literally "blues with my buddies," has consolidated his personal stature and contributions to blues in Spain while offering a significant map of its collective history.