By ERNEST BARTELDES
June 25, 2010
Sign in to view read count 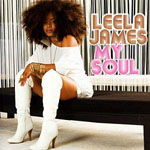 As she begins a relationship with a new label, Leela James presents a selection of all-original songs, contrasting Let's Do It Again (Shanachie, 2009), where the classic soul singer paid tribute to iconic soul singers and songwriters who informed her career. The collection is refreshing, starting with the powerhouse" I Ain't New To This," which contains a sample of Millie Jackson's "Solitary Love Affair" during its intro. James keeps things going with "I Want It All," its thumping bass line a clear tribute to '70s funk. She doesn't want to sound retro here, using the arrangement more as reference than direct influence.

Those who have seen James perform live will attest that her shows are highly energetic, and the same goes for this disc. "Party All Night" is a step in that direction, and seems to have been written with the stage in mind. It possesses a strong backbeat, the perfect showcase for James' powerful pipes and a relentless dance track. But the greatest highlight is her "Mr. Incredible, Ms. Unforgettable," a sexy duet with Raheem DeVaughn (who also co-wrote the song), whose lyrics make this one of the greatest make-out songs this year yet. Can't wait to hear that in a live format.

I Ain't New To This;So Cold;The Fact Is; I Want It All;Party All Night; Mr. Incredible--Ms. Unforgetable; Tell Me You Love Me;Let It Roll; Supa Luva; If It's Wrong; It's Over.