TuneTown is an exciting new collective featuring creative Toronto mainstays, Kelly Jefferson on Tenor Saxophone, Artie Roth on Bass and Ernesto Cervini on Drums. All three members are highly-respected Juno-nominated musicians with serious band leading chops, and the combination of the three leads to some breathtaking and powerful musical moments. The band plays imaginative re-arrangements of standards and originals from all three members.

Toronto-born jazz bassist Artie Roth has been an active composer, bandleader, performer and educator in the national and international jazz communities, since his graduation from York University in 1992 with the Oscar Peterson Scholarship. After two Canada Council sponsored study tenures in New York City (1993 and 1997), Artie returned to Toronto establishing himself as one of the busiest, full-time composer/performers in Toronto. As a leader of his own group, Artie released "Parallels" in 2005, "Currently Experiencing" in 2013, and most recently "Discern" in 2015. As well as leading his own group, Artie is also an active member of The Rich Underhill Group, The Bob Brough Quartet, Kollage and The Jazz Collective.

Drummer-composer Ernesto Cervini is making a name for himself as a consummate bandleader and in-demand collaborator praised for his deep musicality and infectious energy. Downbeat described his fluid style as one that “exemplifies ‘float like a butterfly, sting like a bee’.” Modern Drummer said: “Cervini recalls such old-schoolers as Art Blakey and Billy Higgins… It’s his robust, magnetic personality that fascinates consistently.” After releasing three quartet discs, Cervini made his latest venture a sextet album, with Turboprop released by Anzic Records in 2015. The Ottawa Citizen said: “With his fourth disc, Cervini has strikingly raised his game... With its fetching writing for horns, palpable sense of team spirit, highly focused solos and varied emotional depths, Turboprop is full of jazz pleasures.” He is also a member of Myriad3, alongside keyboardist Chris Donnelly and bassist Dan Fortin. JazzTimes called the collaborative trio “Canada's answer to groups such as The Bad Plus and E.S.T, bearing a similar open-minded perspective and unpredictability.” Myriad3’s second album, The Where, was nominated for a Juno Award (Canada’s Grammy); and the band was also nominated for an Indie Music Award (presented by Sirius/XM Radio) for 2014 Jazz Group of the Year in Canada.

TuneTown was formed in 2016, and they have been performing around the Greater Toronto Area since. They will be releasing their sophomore album, “Entering Utopia” in March of 2021 Show less

The group performs original music composed by and for the trio, bringing together three distinct musical voices on material that runs the gamut from intense to relaxed. Seamlessly assimilating elements from the avant-garde, funk and jazz worlds, There From Here is a stimulating addition to the saxophone trio canon. The Jazz Journal

One of the things I liked about their performances, as in the case of other CDs featuring Cervini on drums, is their absolute unity

The group performs original music composed by and for the trio, bringing together three distinct musical voices on material that runs the gamut from intense to relaxed. Seamlessly assimilating elements from the avant-garde, funk and jazz worlds, There From Here is a stimulating addition to the saxophone trio canon. The Jazz Journal

One of the things I liked about their performances, as in the case of other CDs featuring Cervini on drums, is their absolute unity. This is not a band that goes off in different directions, every man for himself, playing whatever comes into their heads even if it’s off the wall. Everything fits together somehow, as if the entire piece and arrangement was pre-written. Lynn Bayley – Art Music Lounge

From: Entering Utopia
By TuneTown

From: There From Here
By TuneTown 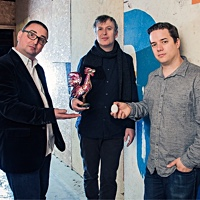 All About Jazz musician pages are maintained by musicians, publicists and trusted members like you. Interested? Tell us why you would like to improve the TuneTown musician page.