Hi Everyone. I want to thank you for visiting the website and checking out my Contemporary Jazz and Latin music project – “Dreams To Reality.” It is the result of a very personal journey and a dream come true. For many years, I carried the inner desire to create music that would represent what was playing in my head, although I was never able to fully document or express that music until this CD. So as a result of many pieces of the puzzle falling into place along with several miracles, I am happy to present to you, the listener, my CD of original compositions.

These songs represent glimpses into my past and are the cumulative effect of the music I heard early on in my life. While growing up in Mississippi, I got my first taste of Rhythm & Blues when my dad brought home a juke box for my seventh birthday. I remember hearing James Brown, “Little” Stevie Wonder, Booker T’s Green Onions and the like. Dad would take me with him when he serviced juke boxes in both upscale dinner clubs as well as blues halls and juke joints. The First Band

At eleven, I picked up the guitar and first learned to play by playing Rock n’ Roll. At 19, I joined a band that toured the Northeast. Appearances included The Pontiac Silver Dome and the Top of the Marriott in New Orleans. At the Detroit Jazz Festival, the band opened for Buddy Rich and the Mercer Ellington Band and received major label interest from Philadelphia producers Gamble and Huff. It was in Detroit, that I heard jazz artists for the first time. An Inspirational Musical Journey

When we got to Detroit and I discovered WJZZ, a 24-hour Jazz station, it was like the lights came on and the sky opened up. I heard so many things I had never heard before. So that music became the soundtrack to my daily life for years.

After our shows at the Renaissance Center in Detroit, I would go up to my room on the 70th floor, turn out all the lights, open the curtains and look across the Detroit River into Canada. The city lights were flickering and glimmering across the horizon while I listened to WJZZ. Man…the thoughts and dreams that would come into my head while hearing all of that great jazz music against that backdrop! Miles, Parker, Coltrane, Metheny, Hancock & Corea, etc. It was like looking back into the history of Jazz and visualizing all the clubs in New York, Chicago & Detroit where many of those great tunes I was hearing were recorded. I even witnessed the amazing Northern Lights for the first time. All of this created a myriad of audio and visual stimulus for me as I let my musical imagination run wild. It sparked more creativity in me than I could contain. A Magical Era

Those magical years of unbridled creativity were part of an era that seemed to me to have no corporate boundaries whatsoever! The farther you could take a listening audience into uncharted musical territory was what rewarded you with true success. Exposure to this served as a window to imagining the vast possibilities in a wide musical universe. It inspired me to dream of the journey I wanted to take creating that quality of music myself. So the die was cast way back then. This CD reflects those musical moments that ignited my imagination and stayed with me all these years. I believe we are all a product of what we are exposed to and our surroundings. I am a product of the music I was exposed to during that magical era. On this contemporary jazz CD, I wanted to state my own case as well as pay homage to a few of those who influenced me. Some songs are extended and hearken back to that great era of Jazz Fusion exploration.

I feel so blessed to have witnessed this adventurous period in musical history. It left me with the feeling of being unafraid to be led by and stay very true to, my own inner musical voice – free to go in any direction. For a young guy coming from humble beginnings in south Mississippi, where you certainly didn’t hear much jazz, this was quite a change. Going from having to special order albums to actually seeing and meeting those artists in person at places like the Royal Oak Theater, Punch & Judy Theater and Masonic Auditorium in Detroit, is the stuff dreams are made of. Chatting with Gino Vannelli after sneaking into his sound check at the famous Cobo Arena and opening for Buddy Rich at The Top of the “Ponch” were high points for me. Those were exciting and formative years. There are great artists continuing this tradition of great music. I am blessed to have played with them on this CD. Thank You!

I encourage you to grab your best headphones, maybe a glass of your favorite wine and settle into your most comfortable listening chair. Tune the world out and enjoy listening to this Jazz musical journey and how it all came together. I thank you for helping me make my Dream a Reality. Turn it up! Show less

"For multi-talented guitarist Stuart Redd, DREAMS TO REALITY is more than an inspirational title. It’s the magical and empowering swirl of excitement he feels digging into and sharing his legendary traditional and electric fusion jazz influences (many he originally discovered listening to Detroit’s jazz station (WJZZ) to create this epic, genre-transcendent collection. Driven by his fluid and melodic, yet crackling style, he blissfully exudes his freewheeling passion for Smooth Jazz, fiery fusion, adventurous rock/funk jazz and sizzling Latin jazz."

"For multi-talented guitarist Stuart Redd, DREAMS TO REALITY is more than an inspirational title. It’s the magical and empowering swirl of excitement he feels digging into and sharing his legendary traditional and electric fusion jazz influences (many he originally discovered listening to Detroit’s jazz station (WJZZ) to create this epic, genre-transcendent collection. Driven by his fluid and melodic, yet crackling style, he blissfully exudes his freewheeling passion for Smooth Jazz, fiery fusion, adventurous rock/funk jazz and sizzling Latin jazz."

"He is truly a gifted musician, possessing great skill on the guitar, and has the wonderful ability to compose music as well."

"I have worked with the best and Stuart ranks highly in that category. He is not only a seasoned musician but an amazing performer as well. From his first note to his last, his audience is captivated." 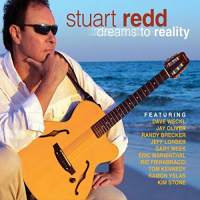 All About Jazz musician pages are maintained by musicians, publicists and trusted members like you. Interested? Tell us why you would like to improve the Stuart Redd musician page.