Young guitar sensation Sean Costello was a highly accomplished and regarded musician who left us much too soon. His early death in 2008 at 29 was a blow to his friends and fans alike. Costello left behind a short but solid reputation as one of the premier exponents of the blues for his generation.

Costello was born in Philadelphia in 1979, moved with his family to Atlanta at the age of 9, and soon afterward picked up the guitar. Within a few short years he'd won the Memphis Blues Society's new talent award, and was on the road with his own band. At age 17 he released his first album, "Call The Cops," acclaimed by Real Blues Magazine as "an explosive debut." He soon joined forces with fellow blues guitarist Susan Tedeschi, with whom he toured and recorded, laying down tasteful lead guitar work on her Gold-certified Tone-Cool debut "Just Won't Burn."

In 2000, Costello released "Cuttin' In" on Landslide Records, which earned him critical acclaim as well as a prestigious W. C. Handy Award nomination for 'Best New Artist Debut.' With 2002's "Moanin' For Molasses" also on Landslide, came a Blues Revue cover story touting Costello as "the top contender to be the next blues star - and soon." Costello's hometown paper The Atlanta Journal-Constitution called his guitar playing "masterful" and of "remarkable maturity."

In 2005, his self-titled fourth CD "Sean Costello" was released by Artemis Records.It was an appealing blend of soul, funk, upbeat rock.This gained him further exposure and an expanding audience base as his reputation grew.

Landslide Records packaged a special “Sean’s Blues,” as a Memorial Retrospective in 2009. The album contains songs culled from the labels two previous Costello releases, “Cuttin' In”(2000) and “Moanin' for Molasses,” (2001) as well as three songs from Costello’s 1996 debut album “Call The Cops.”

Sean Costello was fortunate enough to earn the respect and admiration of many of his own idols, and had the opportunity to perform with his mentors. He shared stages with B.B. King, Buddy Guy, James Cotton, Pinetop Perkins, and Bo Diddley among many others.

He once said, "All I've ever wanted to do was play the guitar well. I've been fortunate to be able to make a living doing it, and I plan to keep it up for the rest of my life." Show less 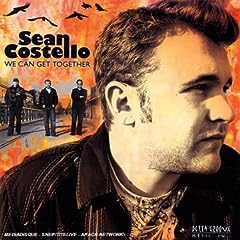 We Can Get Together

All About Jazz musician pages are maintained by musicians, publicists and trusted members like you. Interested? Tell us why you would like to improve the Sean Costello musician page.