With saxophonist Rob Wilkerson’s group, you are as likely to hear a tune by Elliott Smith or Coldplay as a jazz standard. Rob’s original music acts as the central force, blending seemingly disparate elements in a cohesive “other.” Imaginary Landscape, Rob’s debut album on the Fresh Sound New Talent label, reflects his diverse influences, and was deemed worthy of several “best of 2004” lists. As an improviser and composer, Rob is deeply interested in melody and mood; harmony serves these considerations, rather than dictating them. In the words of Marc Meyers (All About Jazz), “…Rob Wilkerson speaks to our times. His music is personal, profound, and thoroughly refreshing.”

A native of Albuquerque, New Mexico, Rob was born on September 27th, 1973 and began playing the alto saxophone in elementary school. Rob dedicated himself and quickly grew to become one of the state's best young musicians, earning many awards and playing professionally in local dance, jazz and salsa bands. Continuing his formal education, Rob pursued and completed a degree in Saxophone Performance from the University of New Mexico.

After graduating from UNM, Rob accepted a fellowship to pursue his master's degree in jazz studies at the University of North Texas. Rob played lead alto in the One O'Clock Lab Band and the Repertory Ensemble at UNT. He also taught a full studio of undergraduate and graduate saxophone students and freelanced around the Dallas area. A year-long opportunity to teach saxophone studio and jazz studies at the University of Wisconsin-Whitewater brought Rob to the Midwest, where he played regularly in the Chicago and Milwaukee area. He was also a founding member of the popular Midwest organ quartet Organgrinder, including Downbeat "rising star" honoree Dan Trudell.

Based in New York City since 2001, Rob leads his eponymous group, composes, and performs with both small and large jazz ensembles. In addition to performing his own original music, he is an active member of the Yumiko Sunami Big Band, the composer consortium Pulse, Schumacher/Sanford Sound Assembly, Darcy James Argue Jazz Orchestra, Russ Spiegel Big Band, Pablo Mayor’s Folklore Urbano, and is a regular guest with several small ensembles. Rob has played with musicians both contemporary and legendary, including Joe Lovano, Jim McNeely, James Moody, Jon Gordon, Randy Johnston, and Chris Cheek. Rob is currently touring with singer Michael Buble.

From: Daring Mind
By Rob Wilkerson 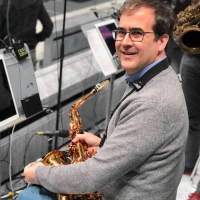 All About Jazz musician pages are maintained by musicians, publicists and trusted members like you. Interested? Tell us why you would like to improve the Rob Wilkerson musician page.