Fans, critics and musicians place Richard Cole in the first rank of his generation's players. A nationally acclaimed talent, Richard is among the most in-demand musicians in the burgeoning jazz scene in the Pacific Northwest. Beside work with such jazz greats as Randy Brecker, Dave Holland, Adam Nussbaum, Julian Priester and John Fedchock, he has toured regularly with fusion star Dan Siegel, performed with r&b legends Gladys Knight, The Temptations and The Four Tops while also composing and performing his own music. Richard's music is clearly jazz, following forward from the intense traditions of the jazz masters, yet it is enriched by the many lessons learned from his wide range of musical experiences.

Richard cites numerous influences including the seminal jazz performances of John Coltrane and Joe Henderson. He studied music at Western Washington University and taught woodwinds, ensembles and improvisation at the prestigious Cornish School of Music in Seattle, Washington.

Richard can be heard in the Seattle area playing with the likes of John Bishop, John Hansen, Jeff Johnson and Bill Anschell. His latest album for the Origin label, The Forgotten, features modern jazz giants Randy Brecker, Joey Calderazzo, and Adam Nussbaum.

Read more articles
”Cole shows he is still in the vanguard of hard-blowing, progressive tenors, with a softer side that emerges from time to time.” —Dave Nathan, All Music Guide 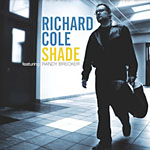 From: Inner Mission
By Richard Cole

A Shade of Joe

From: Shade
By Richard Cole

All About Jazz musician pages are maintained by musicians, publicists and trusted members like you. Interested? Tell us why you would like to improve the Richard Cole musician page.