Born in New York City and raised in a family of musical royalty (the son of singer Ella Fitzgerald and legendary jazz bass player Ray Brown), Ray Brown, Jr. learned early to appreciate the beauty and artistry of music.

Although the primary emphasis was jazz, Ray's heart was in rock and roll and rhythm and blues. The family migrated to California where Ray studied piano at the age of 10. At 14, drums became an extended musical passion, so dad arranged for young Ray to study with Bill Douglas and later with Chuck Flores in Los Angeles. The singing drummer began playing private parties, graduating into the world of playing gigs. While attending Beverly Hills High School, Ray sang with the Mini-singers and Madrigals, who often toured the local area performing at music festivals and hospitals.

After moving to Seattle, Ray continued to sing and play drums at nightclubs while studying with drum man Bill Coleman, Sr. He also began writing and composing while traveling from club to club. "On the road is where I honed my song writing skills," says Ray. "Writing music has always been a wonderful outlet." For 15 years, Ray worked in bands and as a single artist, performing throughout the Pacific Northwest and in Canada, Alaska, Japan, Korea and Guam and doing Department of Defense tours.

"Because of my roots," says Ray, "people always assume I sing jazz or play jazz. That's what they ask when they meet me for the first time. People are surprised when I sing country or rock and roll. They do expect an experience from some rhythm and blues, and I don't mind giving into the 'real deal.' I'm fortunate I've been blessed with a versatile voice."

Ray displayed his versatile voice and other talents in 2001 with his debut album for SRI Records, "Slow Down For Love," a collection of light jazz and R&B songs composed, written and arranged by Ray that reached the top 50 of the Gavin Report. His second album, "Committed From The Heart," released in 2003, has an adult contemporary pop sound layered with R&B. Again, all tunes were composed, written and arranged by Ray. The year 2003 marked Ray's debut on the Las Vegas Strip, as he performed five nights a week in the Le Bistro Theater at the Riviera Hotel & Casino.

"In the studio, the spontaneity is there, but it's controlled," says Ray. "If it's not exactly right the first time you can go back and apply a second coat. But when it's live, it's all hanging out. It's an adventure and I love it."

“Stand By Me”, released in 2005, was Brown’s first real foray into Jazz. Here we start to see his knack for utilizing unique arrangements with songs not typically covered in the Jazz world. Roger Kirkpatrick from Off The Wall records writes, “All those "American Idol" contenders would do well to study closely Brown's exquisite phrasing, his breathing technique and his intonation. He has built on the impressive vocal skills he obviously inherited from his precious mother…You've heard most of these ten songs, but Brown gives each one a fresh and unique treatment.”

In December 2007, Ray performed in Houston at the George R. Brown Convention Center as part of the The Pancho Claus Benefit and it garnered Ray Brown Jr a standing ovation. Backed by the Calvin Owens Blues Orchestra, Ray Brown Jr delivered an amazing performance containing a tribute to the Ink Spots in celebration of Huey Long's upcoming 104th birthday. Long, an original member of the Ink Spots, toured with Ray Brown Jr's mother, Ella Fitzgerald, during the 1940s.

Ray Brown Jr performed a few Ink Spots tunes and a tribute to his Mom that had the crowd on their feet cheering. As he exited the stage he received a long extended standing ovation that lasted several minutes. In addition he received applause from the Calvin Owens Blues Orchestra.

Brown’s latest project promises to be a unique and inviting album, “Friends And Family”. This duets-styled album is an all-star line up featuring the vocals of Dionne Warwick, Jane Monheit, Dr. John, Paul Williams, Melba Moore, Dr. Lonnie Smith, Freda Payne, Maria Muldaur, Sophie B. Hawkins, Sally Kellerman, Dave Sommerville, James Moody and more. In addition Ray’s daughter, Haylee, sings a rendition of “A-Tisket-A-Tasket”, originally made famous by her grandmother, Ella Fitzgerald. Also included in this album as a bonus track is “How High The Moon”, a recording of Ray with both of his parents.

What makes this album a stand-out is that it is not the typical duets, it features some of the best jazz musicians of our time playing on the tracks as well. Some of the tracks feature vibes by Terry Gibbs and a sax solo by David “Fathead” Newman. Also contributing to the spectacular musicianship are Dr. Lonnie Smith’s Hammond B3 grooves, Dr. John’s “Cajun-blues” style piano and sax by James Moody.

“What pleased me the most was seeing the talent of Ray Brown Jr. hold up so well with all these brilliant and different sounding artists. As a result of his versatility and the unique arrangements of the songs, we were able to capture a wide variety of flavors, which I think offers something for everyone on this album,” says producer Shelly Liebowitz.

“Friends And Family” is slated to have its world premiere on iTunes on New Music Tuesday, August 12th , the CD will be available at most retail outlets in September. Show less

Ukraine Tour Coincides With The SRI Jazz Release Of The Best Of Ray...

“All those "American Idol" contenders would do well to study closely Brown's exquisite phrasing, his breathing technique and his intonation. He has built on the impressive vocal skills he obviously inherited from his precious mother…You've heard most of these ten songs, but Brown gives each one a fresh and unique treatment.” -Roger Kirkpatrick from Off The Wall Records

This Is Ray Brown Jr. 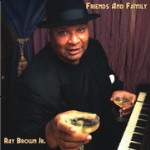 All About Jazz musician pages are maintained by musicians, publicists and trusted members like you. Interested? Tell us why you would like to improve the Ray Brown Jr. musician page.