Bert Olav Holmquistwas a Swedish trombonist who was active in the European music scene since the 1960s. Holmquist was born in Skellefteå. A completely self-taught musician, he began his career in a Swedish armed forces band (I20). He first took up the tuba, switched to valve trombone, and then to slide trombone. Starting as a freelance musician, he managed to land a job with the Swedish Radio big band in 1963 but continued to freelance throughout the 1960s. During this period, he often worked with Björn Ulvaeus and Benny Andersson, who were later members of ABBA.

He also worked regularly with American musician Quincy Jones. In 1971, Holmquist joined the Swiss Radio big band, and in 1976, he moved to Berlin as a member of the RIAS (Radio In The American Sector) big band. In 1978, he became a member of the James Last Orchestra, a position he held until 2013. Over the years, he has also toured and recorded with many other acts, such as Kai Warner, Freddy Quinn, Jerry Lewis, Manhattan Transfer and Lill Lindfors.

Holmquist died on 26 March 2020, after suffering from COVID-19 and Alzheimer's disease. 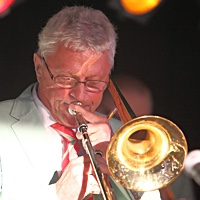 All About Jazz musician pages are maintained by musicians, publicists and trusted members like you. Interested? Tell us why you would like to improve the Olle Holmquist musician page.