Jazz fusion supergroup Niacin, composed of star rock bassist Billy Sheehan, keyboard guru John Novello, and funk rock drummer Dennis Chambers, has both returned fusion to its roots with the resurrection of the venerable Hammond B-3 organ and given it a shot in the arm with an injection of hard rock sensibility. Formed in the mid-1990s, the group has continued to produce albums and tour into the 2000s, racking up accolades along the way—even as its members nurture solo careers and contribute to other bands.

Niacin was formed in the middle of the 1990s when rock bassist Billy Sheehan teamed up with keyboard player John Novello to create a vehicle for their work in jazz fusion and progressive rock. The duo brought in drummer Dennis Chambers to complete the trio. All three musicians were well established in rock and jazz circles at the time of the group's formation, crossing easily between the two musical styles. The centerpiece of the band is the Hammond B-3 organ, an instrument that has graced many a jazz and progressive rock recording and, until the late 1970s, was almost as essential to rock and jazz as the guitar or drum. The instrument also lent the group its name; niacin is also known as vitamin B3.

The man behind the Hammond B-3, John Novello, cites as his major influences rock greats such as Deep Purple, Emerson Lake & Palmer, and Led Zeppelin. Asked to sum up his band's sound in a sentence, he told the Boston Globe's Steve Greenlee that Niacin is "sort of a progressive retro fusion band" and that it was "guaranteed not to play elevator music." By all accounts, the group has more than succeeded: critics have raved about the group's high energy sound, unusual for a trio. Music critic Jeff Miers, for instance, wrote in the Buffalo News that the group is "blazing, passionate, virtuosic and groovy as all get out."

True to form, Niacin's concerts are typically a workout for the musicians. "When we get on stage," Novello told the Boston Globe's Greenlee, "we just let loose." In fact, some have mistaken the trio for a quartet; Novello doubles on guitar synthesizers, prompting at least one record executive to ask the band members for the name of their guitar player.

Niacin signed with famed jazz man Chick Corea's Stretch label to release its eponymous debut in 1997. The group followed up the next year with High Bias, which features a composition by Corea called "Hang Me Upside Down." Corea also plays keyboard on the track. The rest of the album, with the exception of a cover of Joe Zawinul's "Birdland," was composed by Novello and Sheehan. Critics lauded High Bias's cohesion, with Mike Joyce of the Washington Post singling out Dennis Chambers's "sleight of hand finesse." Following the release of High Bias, the group launched a world tour to promote the album, with dates throughout the United States, Europe, and Japan.

Also in 1998 came a live album called Live!: Blood, Sweat and Beers. This album was particularly well regarded by music critics like Ken Hughes of Keyboard magazine, who raved about the band's crowd-energizing performances and called Chambers the "most exciting drummer on the planet."

Moving from the Stretch to the Magna Carta label, the group put out Deep in 2000. Glenn Hughes of rock group Deep Purple contributed vocals to this release, making it the first Niacin album to feature a vocalist. Guitarist Steve Lukather of the rock group Toto was also a guest on the album.

The group's next effort was Time Crunch. Released in 2001, the album features nine original compositions along with a pair of covers: "Red" by King Crimson, and "Blue Wind" by Jeff Beck.

A native of Buffalo, New York, Billy Sheehan has established a reputation as one of the strongest bass players in jazz and rock music. He began his career in the 1970s with the highly regarded Buffalo-based rock band Talas. That group became the first band to be inducted into Buffalo's Music Hall of Fame.

Sheehan first gained widespread renown as a bassist for star rocker David Lee Roth. Roth lured him away from Talas to join the David Lee Roth Band when Roth left Van Halen in 1985. Sheehan stayed with Roth through two platinum albums before leaving to found Mr. Big in 1989. Mr. Big scored a number one hit with "To Be with You," a single from their second album, Lean into It, released in 1991.

Five times voted "Best Rock Bass Player" by the readers of Guitar Player magazine, Sheehan has consistently broken new ground in his music, a trend he has continued with Niacin. Sheehan released his first solo album, Compression on the Favored Nations label in 2001.

John Novello is author of The Contemporary Keyboardist: Stylistic Etudes, named by Sheet Music magazine the "Bible" of contemporary keyboard playing. He grew up in Erie, Pennsylvania, and studied jazz and big band music at the famed Berklee College of Music in Boston in the late 1970s

It was while at Berklee that Novello fell in love with the Hammond B-3 organ, and he played it at Boston area clubs while he was still in school. But, Novello later told Billboard's Steve Graybow, "In 1978, the disco era started, and live music became at thing of the past. Next the DX7 came out, and no one wanted my big Jurassic monster dragged into their clubs." After graduating from school, Novello relocated to California, where he found work as a session player. His biggest claim to fame at that time was as the music director for the disco band A Taste of Honey, which found a hit in the song "Boogie Oogie Oogie."

Novello went on to become a celebrated a jazz and contemporary keyboard instructor, and established a reputation as a powerhouse composer, arranger, producer, and session player, laying down tracks for artists such as Chick Corea, rocker Edgar Winter, and pop star Donna Summer. Through it all, he never lost his appreciation for the distinctive sound of the Hammond B-3. And with Niacin, he finally got his chance to once again make the instrument sing. Along with his work for Niacin, he heads the John Novello Band, a jazz and blues group.

Self-schooled drummer Dennis Chambers has not been far from a drum kit from the time he could hold a pair of sticks. Straight out of high school in 1978, he joined George Clinton's legendary funk band Parliament/Funkadelic. He cut loose from Parliament/Funkadelic in 1985, and has played with numerous other acts since then, including Special EFX, the David Sanborn Band, Bill Evans, and many others. His fist solo recording, Getting Even, was released by Pioneer Records in 1998. Outbreak came next, in 2002, quickly followed by Front Page in 2003.

Each of Niacin's members continues to pursue solo efforts and to play in other bands in addition to his work with Niacin. But the fusion band remains the place for them to, as they put it on Niacin's website, feel "free to play and jam as we please, reach for new heights, and go musically where others wouldn't dare." 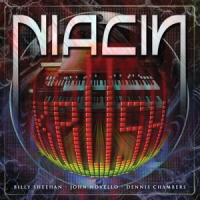 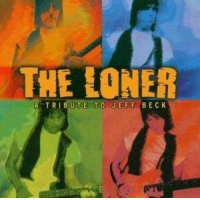 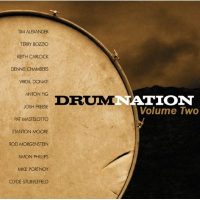 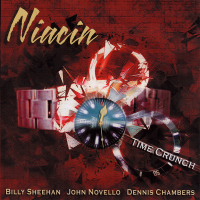 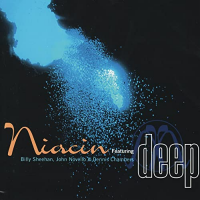 All About Jazz musician pages are maintained by musicians, publicists and trusted members like you. Interested? Tell us why you would like to improve the Niacin musician page.