Drummer, composer and bandleader originally from the US and now based in Vienna, he is most notably known as the bandleader and composer for Led Bib.

With Led Bib, he was nominated for the Mercury Music Prize 2009 (One of 12 albums of the year) and he was also a winner of the Peter Whittingham Jazz Award 2005. Led Bib have topped college radio charts across the US and Canada and have played live across TV and radio in Europe including BBC 2, Channel 4(UK), WDR, BBC Radio 1, BBC Radio 2, ORF(Austria), XFM, Radio 1 (Prague), BBC Radio 3, Radio 6(NL) ,BBC Radio 4 and many more. They have released 8 albums and have toured to some of the highest profile festivals in Europe including North Sea Jazz Festival, Jazzfestival Berlin, London Jazz Festival, Saalfelden Jazz Festival and many others.

Holub is also active in other projects including ‘Blueblut’ a power trio with Pamelia Kurstin - theremin and Chris Janka – guitar who have toured across Europe, Japan and South America and are about to release their 3rd album, Falb/Holub/Satzinger a free jazz sax trio from Vienna, Perlin Noise, a contemporary classical/improv ensemble led by Sicilian composer and double bassist Alessandro Vicard, and he also features regularly on the improv scene with various collections of players including work with Colin Webster, Irene Kepl and many others.

Recently, Holub has been leading a number of masterclasses and workshops. These have included work with Royal Northern College of Music, The Royal Welsh College of Music and Drama, Kathmandu Jazz Conservatory(British Council), Aldeburgh Young Musicians, South West Music School and many others.

“Led Bib are among very few artists who seem less interested in following anyone else's traditions than starting their own!” Yahoo Music

“one of the most edgy and exciting units to emerge on the UK music scene in recent years.” The Scotsman

“One of the UK’s most adventurous groups” Jazzwise 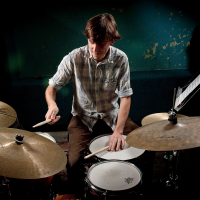 All About Jazz musician pages are maintained by musicians, publicists and trusted members like you. Interested? Tell us why you would like to improve the Mark Holub musician page.