Singer and composer Maria Neckam’s unparalleled sound slips across genre lines and expectations with a youthful ease that’s rare to find. Since releasing her second album as a leader, Deeper (Sunnyside Records), in 2010, her pure, fresh vocals have been acclaimed by critics around the world. To top it off, her compositions are both complex and catchy; one moment intriguing the listener with precisely executed lyrics, the next moment dropping wildly into dissonance. Hailed as “a valiant trailblazer” by JazzTimes, she moves effortlessly from idiosyncratic jazz riffs to haunting pop hooks, blending borders with skill, well-honed technique and range.

Born in a small town outside of Vienna, Austria, Maria has always been driven by music. Growing up, she loved to sing, learned many instruments, and even performed in musical theater, with a rock band, and as a singer/songwriter. Exposure to classical and opera music heavily influenced her childhood, along with pop and rock.

Maria recorded her first album, Crossing and Blending, while studying vocal jazz at the Conservatory of Amsterdam. In that international crossroads, she eagerly soaked up Scandanavian, Middle Eastern and Southeast Asian music, as well as free jazz and contemporary. She gravitated toward Indian music while studying with Sandhya Sanhana. After relocating to New York, Maria studied with Luciana Souza, Peter Eldridge, Theo Bleckmann, Kate McGarry, Nils Vigeland and Samir Chatterjee at the Manhattan School of Music, where she received her Masters of Music in 2007.

Maria refuses to stay within borders: aside from her accomplishments in jazz, she writes and performs straight up pop tunes under the name Milán. Even national borders don’t contain this vibrant talent, as Maria has toured in Italy, Spain, Austria, Belgium, Luxemburg, Netherlands, Germany, Canada and the US (New Orleans, Denver, Los Angeles). In New York, she performs regularly at venues such as Joe’s Pub, Jazz Gallery, Smalls, 55Bar, Rockwood Music Hall, and Cornelia Street Café.

The most recent album, Deeper, made the top 10 albums of 2010 in Le Monde, the largest newspaper in France, and on Something Else! blog. It was also one of the best “New Discoveries” of 2010 on All About Jazz, where Dan Bilowsky writes of Maria, “Her voice has a hypnotic purity that has the potential to stop people dead in their tracks.” With that exceptional voice, Maria carries her listeners and audiences between genres into breathtaking, unpredictable territory.

Describing herself as an artist who uses her vocal technique and range to cross lines, Maria embraces her youthful energy when she rocks out, but always stays grounded in her musical savvy. As Maria herself puts it, “some of my songs are sweet, and many of them catchy, but there is also a dissonance in my music: surprises and craziness.” It may be hard to fit her impeccable sound into one category, but Maria Neckam is an unmistakably fresh, brilliant force to be reckoned with. Show less

“Neckam has crafted one of the most appealing, genre- crossing vocal albums to hit the street in 2010.“

“her voice has a hypnotic purity that has the potential to stop people dead in their tracks.” -All About Jazz

“It’s going to be difficult for her listeners to avoid finding her irresistibly charming.” -PopMatters

“It’s not often that a singer like Maria Neckam comes along. Blessed with a voice that she can set free as it flutters and streaks into stellar regions of music, Neckam is still able to keep it in control

“Neckam has crafted one of the most appealing, genre- crossing vocal albums to hit the street in 2010.“

“her voice has a hypnotic purity that has the potential to stop people dead in their tracks.” -All About Jazz

“It’s going to be difficult for her listeners to avoid finding her irresistibly charming.” -PopMatters

“It’s not often that a singer like Maria Neckam comes along. Blessed with a voice that she can set free as it flutters and streaks into stellar regions of music, Neckam is still able to keep it in control. She has a natural ability for heartbreaking emotion, in much the same way that Billie Holiday did.”

“Neckam performs melodious compositions that are sometimes so twisted and beautiful that they devour the harmony all at once, much like a characteristic Hindustani raga.”

“There is something of the James Joyce of Pomes Pennyeach (1927) in much of this album. Neckam adorns the poetry by traipsing across the vocal landscape, using her breath together with uncharacteristic intonation and phrasing, to create mighty and unforgettable whorls of songs.”

“Neckam is a vocalist unafraid to go where mostly Sufi poets and musicians inhabit their devotional art.” -All About Jazz

“Fortunately for listeners interested in bold originality, Maria Neckam has shaped that cyclonic mix of international influences into a sound and style as refreshing as Kat Edmonson, as idiosyncratic as Björk and often as outre as Patty Waters.” -JazzTimes

“Maria Neckam is the most spectacular discovery in the jazz universe of the first quarter of 2010.”

“I fell completely in love with the original music of this beautiful and kaleidoscopic generous artist. Her sublime soprano voice as clear, crystal clear as possible in the treble, electrified me.” -With Music In My Mind

“It wasn’t just the unaffected clarity or refreshing timbre of her voice, nor her remarkable range that captured my imagination; it was the fearless integrity of her musical ideas.” -Jazz.com 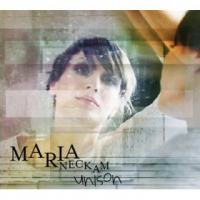 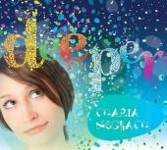 All About Jazz musician pages are maintained by musicians, publicists and trusted members like you. Interested? Tell us why you would like to improve the Maria Neckam musician page.