Luca Lo Bianco was born in Palermo on June, 13th 1974. He started playing electric bass when he was thirteen and after a few years he approached the double bass.

He graduated with the maximum grade in double bass in 1999 under the guide of Mo. Franco Muzzi. In 2010 he obtained the Master degree in Jazz Music with Magna Cum Laude at the State Music Conservatory 'Vincenzo Bellini' of Palermo with a thesis entitled 'Musical syncretism in contemporary Jazz’. From 2010 until 2015 he taught electric bass at the 'V. Bellini' State Conservatory’s Jazz Department of Palermo and from 2011 until 2013 at the 'A. Corelli' State Conservatory’s Jazz Department of Messina. Since 2016 he teaches electric bass, double bass and music for ensemble at the 'G. Rossini' State Conservatory’s Jazz Department of Pesaro (Italy). During his career he performed in numerous festivals in Italy, Japan, China, U.S.A., Austria, Switzerland, Portugal, Spain, France, Slovenia, Norway, Turkey, Germany, Holland, and Malaysia. From 1994 until 2007 he has been a member of the world music band Tammorra with whom he recorded two CDs, 'Ballu Tunnu' (1994) and 'Sali' (2001) produced by the German label Biber Records. The band won also the 8th edition of the 'Folk Herbst Fest' in Plauen (Germany). In 2001 he received the diploma at the 'European School of Jazz Orchestra', studying with Gunther Schuller, Bill Russo, Dusko Gojkovich, with grades 27/30. With the same orchestra, he performed the Italian premiere of the 'New Orleans Suite' by Duke Ellington under the direction of Bill Russo. In 2002 he composed and performed the music of ‘Garibaldi', a short movie directed by S. Pecoraro. In 2003 he performed the 'Claude Bolling's suite for cello & jazz piano trio' at the Teatro Politeama Garibaldi in Palermo. In 2004 and 2007 he played, with Tammorra, at the 'Penang World Music Festival’ and at the 'Rain Forest World Music Festival' in Sarawak Borneo, Malaysia.

From 2005 till 2014 he collaborated with the Italian/Swiss songwriter Pippo Pollina with whom toured intensively all around Europe and recorded two CDs, 'Bar Casablanca' (2005) and 'Ultimo Volo - Orazione civile per Ustica' (2007).

In January 2006 he created the musical theater 'La Scomparsa di Majorana' (based on the novel written by the Italian writer Leonardo Sciascia), which has been presented in premiere in Berlin at the 'Werkstatt der Kulturen', in cooperation with 'Teatro Instabile Berlino'. 'La Scomparsa di Majorana' has become also a CD published by the Italian label Silta Records. In 2007 he founded the independent music label Fitzcarraldo Records and in the same year the Orchestra In-stabile DIS/accordo [O.I.D.], an ensemble of about 15 musicians that improvise each performance following the 'conduction' technique. The orchestra represents one of the most significant and innovative experiences produced in Italy in the last years. In October 2008 O.I.D. was invited to the prestigious 'Hamburg Jazz Tage' in Germany, where it encountered an extraordinary success. The concert was recorded by Norddeutscher Rundfunk and became a CD entitled 'O.I.D. live in Hamburg'. In 2009 he recorded Ear Catcher, his second album as a leader. The CD produced by Fitzcarraldo Records, was highly acclaimed by the Italian press. In 2010 O.I.D. has obtained a prestigious result when the album 'O.I.D. live in Hamburg' won the 'JazzIt Award', the international referendum held by the Italian jazz magazine JazzIt, in the category '100 best Jazz Album produced in 2010'. In 2011 he played in the project 'Opera Italia' directed by Mauro Pagani at Teatro Politeama in Palermo and played in the 'Go Organic Orchestra' conducted by American percussionist Adam Rudolph. In the same year the international cultural network TEDx filmed and published a concert by O.I.D. at the Nautoscopio in Palermo.

In 2012 he has created and conducted O.L.G.A., a performance with fifty musicians, dancers, actors and acrobats realized at Teatro Garibaldi in Palermo. In the same year he recorded 'The American dream' with the trio 'Italian Surf Academy'. The album has been produced by the American label Mode Records and reviewed by many important American magazines, among them 'The Wall Street Journal', 'Down Beat’, 'All About Jazz USA', 'Jazz Times' and others.

In 2013 he wrote and recorded the music for the Art installation 'Improvise Options. Site-Specific Installation' by designer and architect Domenico Argento, presented at 'Biennale di Architettura - Collateral events‘ in Venice. In the same year he played at the Istanbul Jazz Festival with Salvatore Bonafede’s trio. In 2014, during the 'Intensive Program - Contemporary Music Festival: Composers And Performers' at the State Music Conservatory ‘V. Bellini' of Palermo, he held a four Day-Workshop based on conduction technique. The festival involved students of four European conservatories (Kunst Uni Graz - Austria, Kask Conservatorium - Belgium, Syddansk Musik Konservatorium - Denmark, Conservatorio V. Bellini - Italy). In the same year he did a world tour with the trio Italian Surf Academy playing in Europe, USA, Japan and China. In 2015 he recorded the album ‘Hypothesis’ with the band Piano Süd Trio published in November 2016 by the label Unit Records. Swiss magazine Jazz ’n’ more reviewed the album with five stars. In 2017 he reunited with world music band Tammorra. For this occasion the French label Buda Musique produced a new album 'Tammorra - Anthology 1995 - 2017’. In the same year the American label Mode Records produced the second album of the trio Italian Surf Academy entitled ‘Barbarella Reloaded’, inspired by the cult movie BARBARELLA by Roger Vadim (1968).

In 2018 he toured in Europe with Tammorra and Italian Surf Academy and has become father. In 2019 he has founded, with Swiss drummer Marco Käppeli and Italian saxophonist Gianni Gebbia, the band ERGO 3. In 2020 his band WON 3 published the first album entitled 'Thoughts in the fridge'.

“The music is modern, nervous and lanky. With the right urban air and the appropriate morbid curiosity to drive the quintet to look around and investigate the hidden corners of the many scenarios in chiaroscuro which conceal patches of dark, threatening light. As if we were inside a Werner Herzog film. The core language is contemporary jazz but of course the most diverse idiomatic influences add a value which must be appreciated”. Maurizio Comandini - ALL ABOUT JAZZ ITALIA

“The beauty of the overall work of Luca Lo Bianco is to mediate his important chromatic research with massive melodic doses, sought out for a deep impact

”Luca Lo Bianco, Sicilian bass player can be counted amongst those musicians who hardly take anything for granted”. Sergio Spada - SUONO

“The music is modern, nervous and lanky. With the right urban air and the appropriate morbid curiosity to drive the quintet to look around and investigate the hidden corners of the many scenarios in chiaroscuro which conceal patches of dark, threatening light. As if we were inside a Werner Herzog film. The core language is contemporary jazz but of course the most diverse idiomatic influences add a value which must be appreciated”. Maurizio Comandini - ALL ABOUT JAZZ ITALIA

“The beauty of the overall work of Luca Lo Bianco is to mediate his important chromatic research with massive melodic doses, sought out for a deep impact. (4/5)”. Marco Biasi - STORIA DELLA MUSICA

“Bassist Luca Lo Bianco and drummer Francesco Cusa provide a steady rhythmic wave for Cappelli to ride smoothly to shore, but on the reggae-influenced, highly syncopated “Cinque Bambole” and the free-jazz-on-acid spine-chiller “Blood On Black Lace,” they churn up a few contrapuntal rip currents, which Cappelli navigates with ease”. Bobby Reed - DOWN BEAT

“Fitzcarraldo is the antithesis of déjà écoute with an attentive ear in the past and a long ear in the future. The proof is the live recording of the Orchestra IN-stabile DIS/accordo [...] The result is electrifying [...]. The same consideration should be made for EAR CATCHER. Lo Bianco uses autobiographical material here, good fuel to set up a series of surprises in the dynamics in between Crimson and Ornette Coleman without eliminating himself from chamber fascination [...]”. Alceste Ayroldi - JAZZIT

“You almost think of Mingus, if it wasn’t for the fact that Lo Bianco uses other genres, always related to Jazz [...],he makes a eulogy not only to the composer but also to the performers”. Cosimo Parisi - MUSIC BOOM

“In this first glimpse of Luca Lo Bianco’s career, imaginative bassist and composer of a very cheerful vein, he distinguishes himself by the versatility of his interests and the effectiveness with which he manages to join multiple languages [...]” Gigi Razete - LA REPUBBLICA

“[..] The leader, Luca Lo Bianco, plays solos with vibrant sounds. A record that stands out in the panorama of Italian jazz”. Pierpaolo Faggiano - ALL ABOUT JAZZ ITALIA

“There is much history in this album by bassist Luca Lo Bianco, much of the route made by the sicilian musician, and more generally, from Italian Jazz, of the South Italy and therefore even more internationalized from this crossroads and melting pot of cultures, peoples and especially sound which is the southern Mediterranean”. Antonio Terzo - JAUU COLOURS

“La scomparsa di Majorana is a CD that catalyzes full attention, which is binding on all the cognitive faculties, and demands to be heard.” Gianpaolo Chiriacò - COOL CLUB

“After more than 15 years of activity Luca Lo Bianco - instinctive bassist and composer - still want to go around sound spaces to capture sounds in his own vision of music. The album breathes and lets you listen to with enthusiasm, and always gives the impression of giving us a surprise, a momentum that you do not expect. (8/10)”. Roberto Paviglianiti - ROCK ACTION 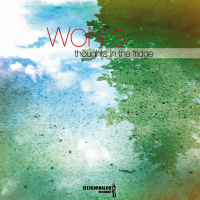 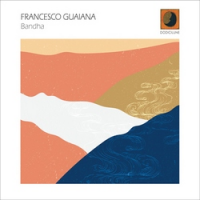 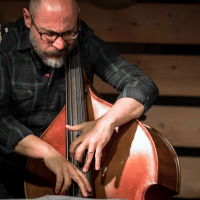 All About Jazz musician pages are maintained by musicians, publicists and trusted members like you. Interested? Tell us why you would like to improve the Luca Lo Bianco musician page.