Currently living in between New York and Bogotá (Colombia), Juan Andrés Ospina is one of the most active and prominent exponents of a very outstanding generation of Colombian musicians. His wide range of musical projects make him hard to define: he might as well be producing and arranging, conducting his big band, touring as a sideman pianist, composing for film, or creating comedy content for the internet.

His latest album, Juan Andrés Ospina Big Band’s “Tramontana” (2018), features 26 musicians from 10 different countries, and among them is the 14-times Grammy awarded saxophonist Paquito D’Rivera. The album’s realization follows a successful, inventive Kickstarter campaign, which raised 35,000 dollars through the support of 600 backers from all over the world. Recently Juan was invited to conduct and perform his big band music with the legendary WDR Big Band (Cologne, Germany), and the album’s release concert will take place at Dizzy’s (New York) in October 2018.

He recently composed the music for the French/Colombian film “Kairós”, directed by Colombian director Nicolás Buenaventura. The film will be premiered during the Fall 2018.

His debut album as a leader BBB: Barcelona, Bogotá, Boston (Armored Records, 2009) was recorded in Boston with a selected fine group of emergent jazz musicians in New York, and the album was referred by the prestigious All About Jazz magazine as one of the “best jazz albums of the year”.

In the past years, Juan Ospina has produced, arranged and recorded the piano in several international awarded albums. Among them is Colombian singer Marta Gómez’ Este instante (2015), which won a Latin Grammy and received two Latin Grammy nominations; Portuguese singer Sofia Ribeiro’s Ar (2012), which won the “Revelation” prize by the prestigious jazz French magazine Jazzman; and Portuguese singer Luisa Sobral’s debut Cd The Cherry on my Cake (2011) which won a Golden and Platinum award, and reached the top charts in many European countries shortly after its release. In 2014 he wrote an arrangement for Colombian singer Fonseca’s Latin Grammy DVD Fonseca Sinfónico, which won a Latin Grammy for “Best pop vocal album”, and in 2007 he worked as arranger for the Latin Grammys Live Achievement Awards Ceremony.

Juan Ospina has toured widely as musical director of Portuguese singer Sofia Ribeiro’s group, as well as with Marta Gómez, Sylvie Bourban (for whom he arranged her last four albums), Fonseca, and New York based and multi awarded band Banda Magda. He has performed in prestigious theatres such as the Lincoln Center (New York) and the Carnegie Hall (New York), as well as in important jazz festivals in Europe, Latin America and Japan. 14-times Grammy Awarded Paquito D’Rivera Quintet has performed some of his original compositions in important venues such as New York’s Blue Note and the Carnegie Hall, and his Big Band compositions have been performed by the UMO Jazz Orchestra (Finland), the Yukimori Big Band (Japan), the Greg Hopkins Big Band (Boston) and the Bogotá Big Band (Colombia). The music of his album BBB has been requested for educational purposes by the prestigious Berklee College of Music (Boston), the NEC (New England Conservatory) and the UNT (University of North Texas) and the Universidad Javeriana (Bogotá, Colombia).

Parallel to his work as a producer, pianist and arranger, he leads the comedy/musical duo “Inténtalo Carito” with his brother Nicolás Ospina. Together they composed the famous song “Qué difícil es hablar el español”, which to date has more than 20 million views in their Youtube Channel, and their fan base grows every day reaching millions of people from different countries around the globe. The duo has gathered the attention of the important around the globe, and together they have performed in Australia, Spain, the US and Colombia.

Juan Andrés started his musical studies at the Universidad Javeriana (Bogotá), and short time after he moved to Barcelona (Spain), where he continued his classical and jazz studies at the Escola D’Angel Soler and the Taller de Musics. In the year 2005 he receives a scholarship to attend the prestigious Berklee College of Music, and graduated Summa Cum Laude in 2007. At Berklee he studied with musicians such as Danilo Pérez, Maria Schneider, Greg Hopkins and Dave Samuels among many others, and he was a recipient of the Jazz Herb Pomeroy Award and the Herb Pomeroy Award. He moved to New York City in 2009.

Read more articles
“Listeners who studiously avoid all-original CDs need not fear getting mired in any private, self-satisfied noodling; rather, Tramontana features a solid, propulsive coherence, a blend of fire and heart, driven by international rhythms and flair.” Dr. Judith Schlesinger, All About Jazz (USA)

“Juan Andrés Ospina enriches music in incalculable ways. First there is his attractive way with melody, which he enriches with the kind of flirtatious rhythm that makes these melodies impossible to resist falling in love with. Then there is sense of “the delicious”, which, to one’s mind, is that certain something that makes some musicians like “master chefs” who can impart an almost tactile sense to musical harmony; something that makes one not only ‘feel’ their music, but almost “taste” its hidden delights.” Raul Da Gama, World Music Report (USA)

“Listeners who studiously avoid all-original CDs need not fear getting mired in any private, self-satisfied noodling; rather, Tramontana features a solid, propulsive coherence, a blend of fire and heart, driven by international rhythms and flair.” Dr. Judith Schlesinger, All About Jazz (USA)

“Juan Andrés Ospina enriches music in incalculable ways. First there is his attractive way with melody, which he enriches with the kind of flirtatious rhythm that makes these melodies impossible to resist falling in love with. Then there is sense of “the delicious”, which, to one’s mind, is that certain something that makes some musicians like “master chefs” who can impart an almost tactile sense to musical harmony; something that makes one not only ‘feel’ their music, but almost “taste” its hidden delights.” Raul Da Gama, World Music Report (USA)

“Tramontana creates such a unique palette of sounds and feelings that I found myself dislodged from the big band rut and feeling like I discovered a new frontier in jazz. It blew me away, like a gale force wind. Use THAT as a pull quote. I dare you.” Marc Phillips, The Vynil Anachronist (USA)

“What’s striking on this disc is the songfulness of Ospina’s writing and the musician’s performances, as well as the unexpected, and in some cases unidentifiable, textures of the arrangements. This isn’t slam-bang big band writing (...) the rhythm section moves along blithely, as if unaware of the complicated re-harmonizations it is being called on to accompany. I’ve not heard anything like it.” Michael Ullman, Arts Fuse (USA)

“From his South American origins, Juan Andrés Ospina has preserved the art of subtle melodies, languid and swirling rhythms. In the New York musical universe, he has cultivated his sense of understanding with a very unique taste. He found musicians at the height of his ambitions to deliver one of the most interesting orchestral jazz records in recent months.” Tierry Giard, Culture Jazz (France)

“Juan Ospina’s irresistible new CD BBB: Barcelona, Bogotá, Boston, is a landmark. It stands with authority as a milestone pointing back and forward (…) It marks without debt the ‘arrival’ of Juan Ospina as a young master already having a uniquely valuable impact on listeners, professional musicians and ambitious artists of all kinds.” Christopher Lyndon, Radio Open Source

I have worked as a teacher in three different colleges in Bogotá, Colombia, teaching mainly Jazz Harmony, Ensembles and private piano lessons.

In my clinics I explain how I approach the art of arranging for different ensembles and situations. By decomposing the form and the way to treat each section I go with the students throughout the creative process, sharing with them the different problems and stages of it. 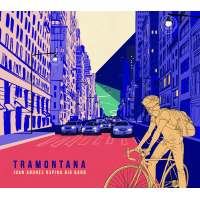 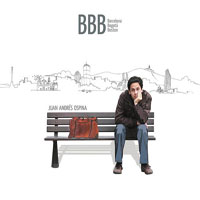 From: Tramontana
By Juan Andrés Ospina 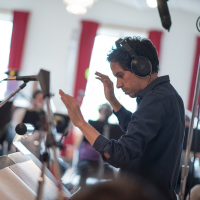 All About Jazz musician pages are maintained by musicians, publicists and trusted members like you. Interested? Tell us why you would like to improve the Juan Andrés Ospina musician page.