Seven years ago, Jua Howard was making something of a name for himself in neo-soul circles, crooning in velvety tenor tones reminiscent of Luther Vandross and Donny Hathaway in clubs from New York City to London. Anticipation, his 2007 self-released debut CD of mostly original ballads, was picking up play on smooth-jazz and R&B stations.

Yet Jua, who uses only his first name professionally (it’s Swahili for “sun”), was having second thoughts about his musical direction. “I got tired of what I was doing,” the Chicago-born singer says. “With the neo-soul scene, everything started sounding the same.”

During the summer of 2009, after quitting a nine-to-five job with a nonprofit scholarship program in Washington, D.C., Jua moved to the San Francisco Bay Area and enrolled at Berkeley’s Jazzschool Institute, which is now known as the California Jazz Conservatory. During his year there he became the first recipient of the school’s Mark Murphy Vocal Jazz Scholarship, named for veteran poll-winning singer Murphy. He also studied privately with vocal coach Raz Kennedy, formerly of Bobby McFerrin’s Voicestra.

Colors of Life features four original compositions by Jua (three written in collaboration with his former Jazzschool instructor, pianist Matt Clark, the other with Kenner), along with the standard “Old Devil Moon” by Yip Harburg and Burton Lane and tunes by Sam Rivers, Abbey Lincoln, Bob Dorough, Bill Withers, and James Williams and Pamela Baskin- Watson.

The disc opens with Rivers’s lovely “Beatrice,” which the saxophonist first recorded as a ballad on his classic 1964 debut album Fuchsia Swing Song on Blue Note. Jua became captivated with the song when Jazzschool instructor Mark Levine presented it during a jazz theory class. Jua proceeded to set his own lyrics to it for a vocal class. He and the band swing it at a brighter tempo than Rivers had.

Clark introduced Lincoln’s haunting “Bird Alone” to the singer. “It spoke to me,” Jua says. “At that point in my life, living in the Bay Area and being away from my family and a lot of people I’d grown up with, I felt isolated to a certain extent. It’s a very mysterious type of song and journey that Abbey wrote about, but it has a sense of hope and pride and glory within it so that you know that even though you’re on a solitary journey, you’re headed for something that’s great. I knew that if it hit me in that way, I knew that someone else would be able to relate to it.”

Inspired by Cassandra Wilson and Jacky Terrasson’s treatment of “Old Devil Moon,” Jua takes the tune from Finian’s Rainbow at a slower tempo than usual. “The way they slowed it down, you really were able to hear the chord changes mixed with the harmony and the counterpoint,” he explains. “It was slower than the way I do it, but I still wanted to make sure that I kept a sense of intimacy and sensuality.”

On the plaintive “Time Past,” which talks about an individual’s personal, fluctuating relationship with time and how fleeting it is, Jua’s use of richly resonant sustains helps to emotionally enhance the song’s meaning. He wrote the melody for the bridge and all the lyrics, around which Clark put finishing touches.

Jua first came across Dorough’s “Love Came on Stealthy Fingers” in a songbook and was initially intrigued by the adjective “stealthy” in the title. After learning the song, he checked versions by Irene Kral and Carmen McRae, and then worked up his own take on it with help from Kenner, who provides the sole accompaniment with his acoustic guitar. .

Kenner composed the jazz waltz “Colors of Life” as an instrumental, upon which Jua created a multi-hued palette of life-affirming metaphors with his lyrics.

Jua says that Withers’s “Let Me Be the One” is one of his mother’s favorite songs. “Onaje did a great arrangement of the tune that even if you’re familiar with the original, you really don’t think of it the way it’s arranged on this album,” Jua adds.

Colors of Life ends on especially positive notes with two collaborations by Jua and Clark: the lilting “Believe” and the swinging “Finally.” “I’m a believer in staying positive and having the right perspective about whatever you’re going though in life,” the singer says. Both tracks feature robust tenor saxophone solos by longtime Gumbs associate Byam.

Jua Howard was born in Chicago on January 6, 1979. His mother kept her only child enrolled in numerous after-school activities, including karate, gymnastics, soccer, tap dancing, and ice skating. “She made sure I was busy,” he recalls. “I’ve very grateful to her for having exposed me to as much as possible and for helping me find my way.”

After ten years in the Windy City, Jua and his mom moved to Lanett, Alabama, where he began playing trumpet in the fifth grade. He joined the youth choir at a local Baptist church and was frequently called upon to solo. While in high school, he was selected for the Alabama All-State Boys Choir, an ensemble of some 70 voices that focused on European classical music. He and his mother then spent two years as members of the All-Atlanta Choir and made frequent four-hour round trips to the Georgia metropolis to rehearse and perform. Jua then enrolled at Emory University in Atlanta, where he sang in the gospel choir and graduated with a B.A. in English.

Disillusioned with performing in vocal ensembles, Jua stopped singing for two years after graduation. He returned to Chicago, where he briefly worked at a law firm before becoming a fifth-grade substitute teacher. Encouragement from vocal coach Sondra Davis caused him to resume applying his richly rounded multi-octave pipes to song.

Jua spent the next seven years in Washington, DC, where he read undergraduate applications as an admissions officer at Howard University and worked on the side as a background vocalist with the Blackbyrds, the band best-known for such 1970s hits as “Walking in Rhythm” and “Happy Music.”

“Jazz was clearly a big part of their foundation,” he says of the Blackbyrds. “Singing with them made me think about pursing jazz as a career.”

So did Nancy Wilson. “I saw her perform at an amphitheater in Atlanta,” Jus explains. “It blew my mind. She has such presence. It just kinda made me change my way of thinking.”

“Jazz, which is based on improvisation, is about being a part of an ensemble and everyone communicating with each other to get the musical statement across,” he adds.”Even though I’m standing in front, I’m just one of the instruments telling a story to the audience. It’s not about me. It’s about the story. It’s about the music and paying respect and credence to the music.”

Jua cites Vandross, Hathaway, Al Jarreau, Johnny Mathis, Mark Murphy, and gospel great Daryl Coley as being influences on his style. Yet, as evidenced throughout Colors of Life, Jua has developed a distinctive, emotion-gripping approach to song that’s quite wonderfully his own.

“Colors of Life is a rebirth of me as an artist,” he says. “I’m putting myself out there like, ‘This is who I am, and this is what’s in store.’ I’m making the statement of, ‘I’m here. This is what I’m supposed to do. This is my destiny.’”

Sorting Out the Tijuana Sound 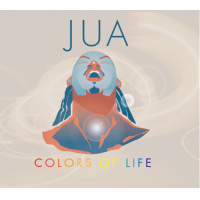 All About Jazz musician pages are maintained by musicians, publicists and trusted members like you. Interested? Tell us why you would like to improve the Jua musician page.