Joel Haynes is an emerging, dynamic drummer on the Canadian jazz scene. Since the age of 7, he has been playing and studying the drums with absolute dedication and determination. Joel has grown from his early community musical experiences in his hometowns of Hamilton and Burlington, Ontario, and has progressed to playing with some of the finest jazz artists in Canada. Highlights include being nominated for a “National Jazz Award” in 2003, and being invited to perform with Oscar Peterson and Dave Young for the Toronto Tsunami Relief Benefit in January, 2005.

Many influences have formed Joel’s musical styling. His jazz studies at Humber College, McGill University, and the University of Toronto have given him a broad base of skills and knowledge which have shaped him into a highly technical, defined, inventive and diverse musician. Instructors in Montreal and Toronto include: Andre White, Dave Laing, Chris McCann, Bob McClaren, Don Vickory, and Barry Elmes.

During and following his educational experiences, Joel has performed at many major jazz festivals in North America, South America, The Caribbean, and Europe. While in Ontario, he has played with many outstanding jazz artists, such as: Ray Anderson, Rob McConnell, Sam Noto, Dave Young, P.J. Perry, Cornelius Dupré, Don Thompson, Neil Swainson, Jim Vivian, Bernie Senensky, David Braid, Steve Koven, Andrew Scott, Billy Robinson, and Verve recording artist, Denzal Sinclaire. While Joel is admired for his skills within the jazz idiom, his diversity and excellent reading skills has enabled him to perform for popular musical theatrical shows such as: Cats, Urinetown, The Rat Pack, and West Side Story. Additional tours include an upcoming project with Darren Sigesmund’s Quintet with David Braid, touring Hong Kong, Tokyo, Shanghi, and various cities in Korea.

Joel’s largest project to date is his debut C.D. which was released November 2005, titled The Time is Now, (Cellar Live Records, Vancouver). It is a collaborative collection with Tilden Webb, Jodi Prosnick, and Denzal Sinclaire who appears on one track as a special guest. 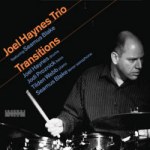 All About Jazz musician pages are maintained by musicians, publicists and trusted members like you. Interested? Tell us why you would like to improve the Joel Haynes musician page.