The New York Times has pinpointed a “feeling for a rugged but jaunty experimentalism” in the music of trombone veteran Joe Fiedler, a figure as esteemed in New York jazz circles as he is in the Afro-Caribbean and pop scenes. He’s an adventurous improviser and bandleader whose small-band outings include The Crab, Sacred Chome Orb, Joe Fiedler Plays the Music of Albert Mangelsdorff, I’m In and Like, Strange. His two releases by the unique low-brass unit Big Sackbut — a trombone/tuba corollary of sorts to the World Saxophone Quartet — have also cemented Fiedler’s reputation as a musical thinker with boundless imagination.

Owing to his long experience in pit bands, salsa groups and countless other professional settings, Fiedler had the opportunity to play trombone on Lin-Manuel Miranda’s show In the Heights (not long before Hamilton’s runaway success). Tony Award-winning orchestrator Bill Sherman was on the gig and took to Fiedler, bringing him on board the newly revived children’s show Electric Company. After three seasons, Sherman and Fiedler made the transition in 2009 to Sesame Street. From playing 350 gigs a year on the freelance circuit, Fiedler officially became a Sesame Street music director, working on what would become hundreds of song arrangements and thousands of underscoring cues (and still climbing). His latest small-group CD, Open Sesame, grapples with the legacy of the storied show of which he’s become an integral part. On it he reimages the timeless music of Joe Raposo, Jeffrey Moss and others on his own terms, with help from tasteful hell-raisers Jeff Lederer, Michael Sarin, Sean Conly and guest Steven Bernstein (of Sex Mob fame).

A Pittsburgh native and a New Yorker since 1993, Fiedler studied at Allegheny College and the University of Pittsburgh before launching into work as an in-demand sideman. He’s become one of the first-call trombonists in the world, featured on more than 100 recordings. He’s had extensive experience in the heart of the flowering big band scene, playing with Maria Schneider, Chico O’Farrill, the Mingus Big Band, Andrew Hill, Jason Lindner, Dafnis Prieto, Kenny Wheeler, Satoko Fujii, Miguel Zenón and many more. In smaller units he’s played with Lee Konitz, Anthony Braxton, Cecil Taylor, Myra Melford, Matt Darriau’s Ballin’ the Jack, David Weiss’s Endangered Species and a host of others. Fiedler also paid years of dues on the salsa and Latin circuit with Celia Cruz, Eddie Palmieri, Willie Colon, Ralph Irizarry and other major acts. His pop credits include Jennifer Lopez, Marc Anthony, Wyclef Jean, The Four Tops, Melba Moore and Leslie Gore, to name a few.

Without doubt this mass of musical experience filters into the trombonist’s mindset, the way he looks at craft, audience, band dynamics and perhaps most of all fun. Coming up in the ’80s, he recalls his favorite bands as the Jazz Passengers, Carla Bley, Ray Anderson — “bands and musicians that had this sense of humor, this sense of burlesque,” he says. Recalling the last great gasps of the downtown scene and his brushes with the early Knitting Factory bands, Fiedler knows that while many of those touchstones have disappeared, they live on still in today’s sensibilities and methods, for Fiedler as for many likeminded peers.

Downbeat and others have noted Fiedler’s effortless way of traversing charged free improvisation and music of more established tonal and formal parameters — “out” vs. “in,” as jazz musicians sometimes call it. He’s apt to draw out long and lustrous melodic tones while also manipulating his trombone sound with multiphonics and other extended techniques (playing one note and singing a higher note, sometimes producing an overtone to complete a chord). The deep sense of blues, tailgate and other earlier jazz approaches to the horn come through in Fiedler’s music, as do the sonic innovations of Mangelsdorff, or the mainstream hard-bop aesthetics represented by Slide Hampton, J.J. Johnson, Steve Turre and so many more. Melding it all into a signature voice, Fiedler harnesses the top talents of dear friends and associates in an endless quest to broaden his instrument’s reach. As veteran journalist Dan Ouellette has written, “It takes a true believer in [the trombone’s] potential for jazz esprit to courageously explore its range of conversation. That’s why Joe Fiedler is so impressive.” Show less 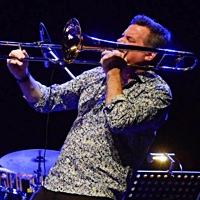 All About Jazz musician pages are maintained by musicians, publicists and trusted members like you. Interested? Tell us why you would like to improve the Joe Fielder musician page.