Philadelphia born Jimmy Amadie is a veteran jazz pianist, called "a serious keyboard talent" by Billboard Magazine and one of "America's leading jazz educators" by Jazz Forum Magazine. While Amadie's skill and musicianship have been compared to Tommy Flanagan and Hank Jones, his determination to overcome devastating obstacles has equally inspired.

Jimmy Amadie is known today as a musician and music educator, but his first love was competitive sports. Jimmy was a good athlete and participated in the citywide Sand Lot Sports League playing baseball, the Pop Warner Conference for football, and learned to box at Lighthouse Boys Club. Sports related injuries prevented Amadie from further competition. He then devoted all of his time to music.

Amadie studied classical piano at the Brahms Conservatory of Music. He came to jazz piano in his early twenties when he toured with The Woody Herman Band, accompanied Mel Torme, and played with legends like Red Rodney, Charley Ventura, and Coleman Hawkins. He was the leader of the house trio at the famous Red Hill Inn in Pennsauken, NJ for three years and later brought his trio to New York's Copacabana.

During these years, playing up to 70 hours a week, Amadie's hands developed a severe form of tendonitis. His condition was so extreme that he could not play for over thirty years. This resulted in the loss of his livelihood as a performer. He then turned to writing. He authored two textbooks, "Harmonic Foundation for Jazz and Popular Music" (1981) and "Jazz Improv: How to Play It and Teach It" (1990). Amadie's books are widely utilized and sections have been translated into Italian, French, German, and Japanese.

Remarkably, after seven bouts of reconstructive surgery, physical therapy, and sheer perseverance, Amadie returned to the piano. His first album, "Always With Me," (1994) was recorded a few minutes at a time, separated by long periods of rest. Jimmy continues to record on a regular basis and his efforts have produced seven albums for which he arranged all of the music and composed many originals.

Amadie is a master teacher. He has taught students at all levels: high school, college and professional musicians as well as private students in his studio. In addition, he taught at the summer programs for teachers at both Berklee College of Music and Villanova University for a combined twenty-nine years. He has conducted courses and workshops at both state and national conferences throughout the country, including the International Association of Jazz Educators and the National Music Educators Association.

Jimmy has been profiled on CBS Sunday Morning, NPR's Weekend Edition with Scott Simon and the Philadelphia Inquirer as well as Jazz Times and Down Beat magazines and Jazz Forum, Europe's leading jazz magazine. He co-authored compositions with Steve Allen and was a composer/conductor for National Football League Films Scores.

Currently, Jimmy is teaching, playing, and working on a trio album featuring Tony Marino on bass, and Bill Goodwin on drums. He is happily married to Lucille, his wife of forty-five years, who has enabled him to accomplish his life's work. His success would not have been possible without her many sacrifices. Show less

Pianist and Educator Jimmy Amadie Passes Away at Age 76 After Long...

Jimmy Amadie - In A Trio Setting: A Tribute To Frank Sinatra 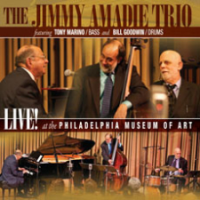 In A Trio Setting

All About Jazz musician pages are maintained by musicians, publicists and trusted members like you. Interested? Tell us why you would like to improve the Jimmy Amadie musician page.