Jackie Myers is a jazz pianist, composer, and singer. She has been pleasing audiences in Kansas City and Austin TX with shows that feature a mix of jazz standards by the greats, including Herbie Hancock, Thelonious Monk, Horace Silver, Freddie Hubbard, Charlie Parker, Bill Withers, and others. Audiences are treated to Myers’ innovative and fluid keyboard work, punctuated by her bluesy vocals. At other times, Myers’ shows feature a purely instrumental dose of her own compositions. Performing as part of a trio, quartet, or quintet, Myers is typically joined by some of the best musicians offered by a locale, typically combining a crisp rhythm section with top artists on horns or guitar. In 2018, Myers added Hammond organ to her repertoire, adding to the diversity of her performances. Jackie's jazz work is influenced by her love of soul and R&B, and her R&B work is influenced by her love of jazz. As for Myers’ vocals, Louisiana musical writer Dominick Cross said about an earlier recording: “My initial reaction to the recording was that in some ways its Michelle Shocked meets Amy Winehouse. And several listens later, I'd say the same thing with more emphasis on Winehouse.” A writer in Johnson County, Kansas said, “Her vocals on Ain’t No Sunshine and The Stars Fall on Alabama demonstrated that Myers … brings a singular talent to the scene.” Myers debuted her first straight ahead jazz album in 2018 - The Instrumental One, which was recorded live at the prestigious Green Lady Lounge in Kansas City. Made up of eight tracks, including six original compositions, Jackie's keyboard stylings groove what one critic called "jazz from a solid R&B point of view." Critics compared The Instrumental One to works by Ahmad Jamal and Les McCann. Fantastic performances are turned in by Danny Embrey on guitar, Eddie Criswell on bass, and Daniel Hogans on drums. Kansas City’s Roger Atkinson wrote: “I still like that soul-jazz genre, and the inclusion of Danny Embrey certainly adds to the success of the record. Plus, Jackie Myers has a new fan: me.” Myers has also done impressive work in musical production. In 2017, she produced the musical production Silent Films Out Loud: A Tribute to Buster Keaton. This event featured a nine-piece ensemble playing newly-written compositions to four Buster Keaton silent film classics, including a score by Myers to Buster Keaton’s 1922 Cops. This event, sponsored in part by the City of Austin Economic Development Department, filled Austin's premier theater - The Stateside at the Paramount.

Myers also produced a Carole King Tribute, featuring a full band with Myers on piano and vocals, and five other vocalists. The group performed all of the songs on Carole King’s Tapestry album, and played to several standing-room only venues. Earlier works by Myers were in a funk/R&B style with heavy doses of horns and guitar. These include the album Third! which has enjoyed airplay on many radio stations. Earlier recordings include Beneath Stained Glass, Ten-Foot Twins, and Count to Three. Recently, Myers was featured on a Daytrotter session which was lauded as one of the best of that week's releases by the site and drew comparisons to “Joni Mitchell’s jazz period” by the site founder. Show less 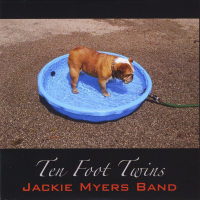 All About Jazz musician pages are maintained by musicians, publicists and trusted members like you. Interested? Tell us why you would like to improve the Jackie Myers musician page.